To save or to spend crypto? That is very much the question for many investors today. As they invest more, they are often forgoing other purchases – some of them essential. Many have even started to accumulate debt in order to buy more crypto or avoid selling it. In order to get to the bottom of what the cryptocurrency craze is really costing Americans, Gambler’s Pick spoke to 1,000 people on the topic.

Crypto investors shared the amount they had, how they were financing the holding, and what they had given up in order to maintain the investment. Responses showed interesting differences across genders and generations.

Trade-Offs for Holding On to Cryptocurrency 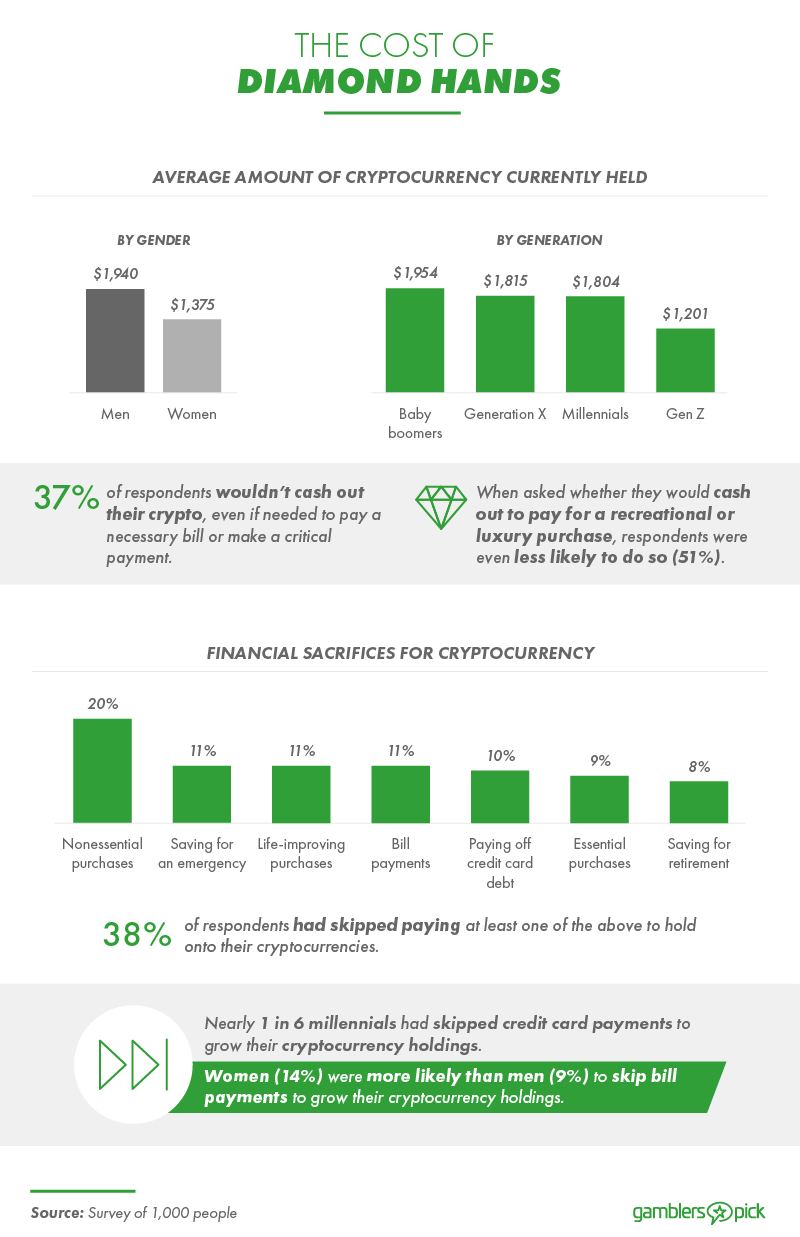 Diamond hands are as expensive as they sound. On average, Americans reported currently holding $1,707 of cryptocurrency each but often admitted that they wouldn’t touch that money even if a necessary bill or critical payment came up. More than 1 in 10 stopped saving for an emergency to buy crypto, while the same amount said they had skipped out on a purchase that would have genuinely improved their life.

Millennials were the most likely to skip saving for their retirement or miss credit card payments to hold onto their existing crypto stashes. That said, the majority of credit card debt is currently held by Generation X, so perhaps millennials have slightly more wiggle room here. Baby boomers, though unlikely to take on debt for cryptocurrency, also had the highest average value already saved up.

So how exactly did Americans come to own their roughly $1,700 worth of cryptocurrency? 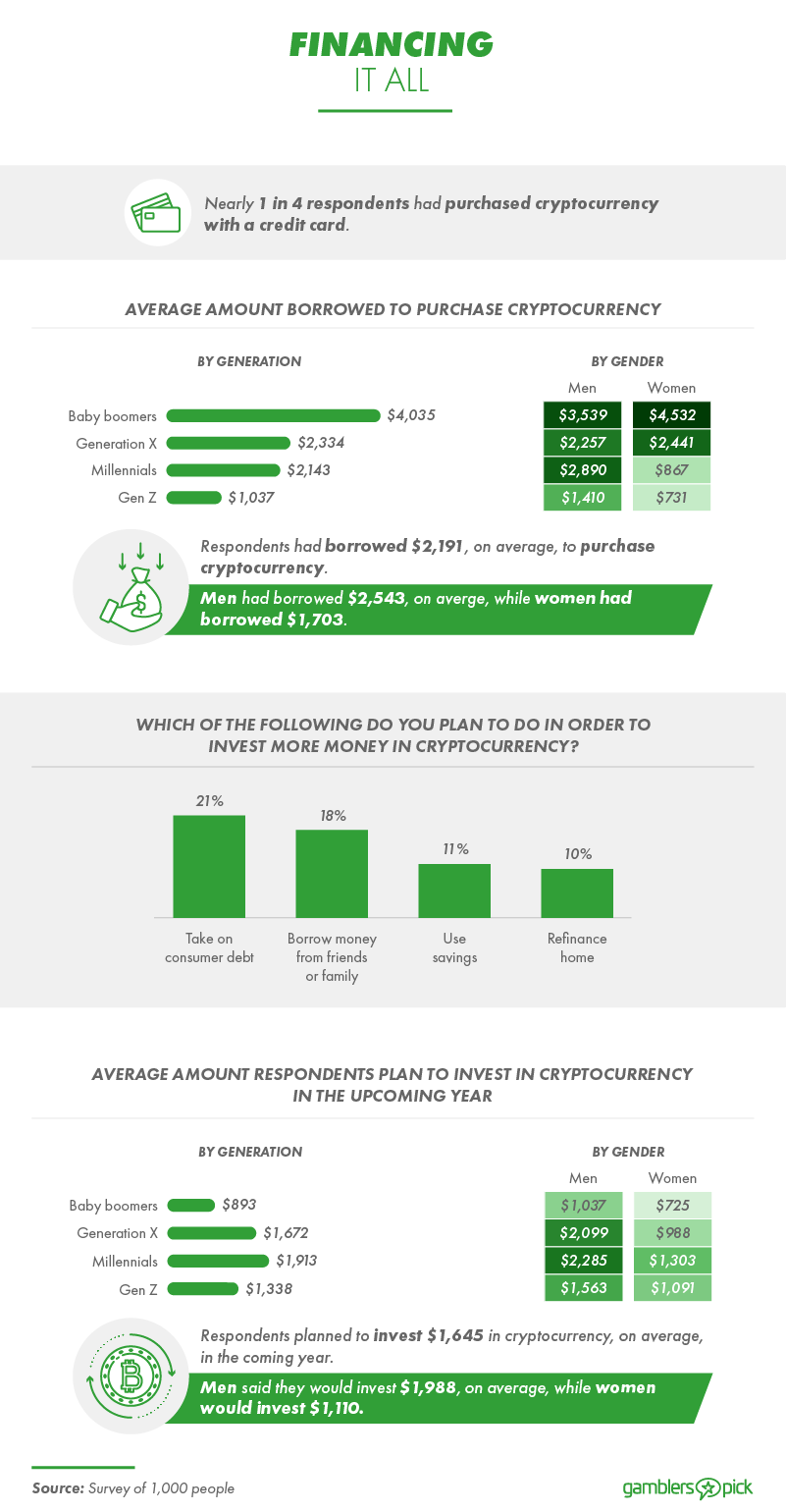 Cryptocurrency may well be one of the reasons that many Americans have credit card debt in the first place: one in four respondents said they purchased cryptocurrency with credit instead of cash. And, in spite of holding only $1,707 worth of crypto, respondents had borrowed nearly $500 more than that to afford it, whether from the bank or from friends and family. 21% of respondents planned on accumulating consumer debt in the future to afford more cryptocurrency.

The investment gender gap also appears to continue over from traditional investments into cryptocurrency. Men were planning to invest an average of $1,988 into cryptocurrency this upcoming year – $878 more than women. Men were also more likely to borrow in order to add more crypto to their personal rosters. However, while men were more likely to borrow in general, generational breakdowns show that Gen X and Baby boomer women had borrowed more on average than men of the same age. 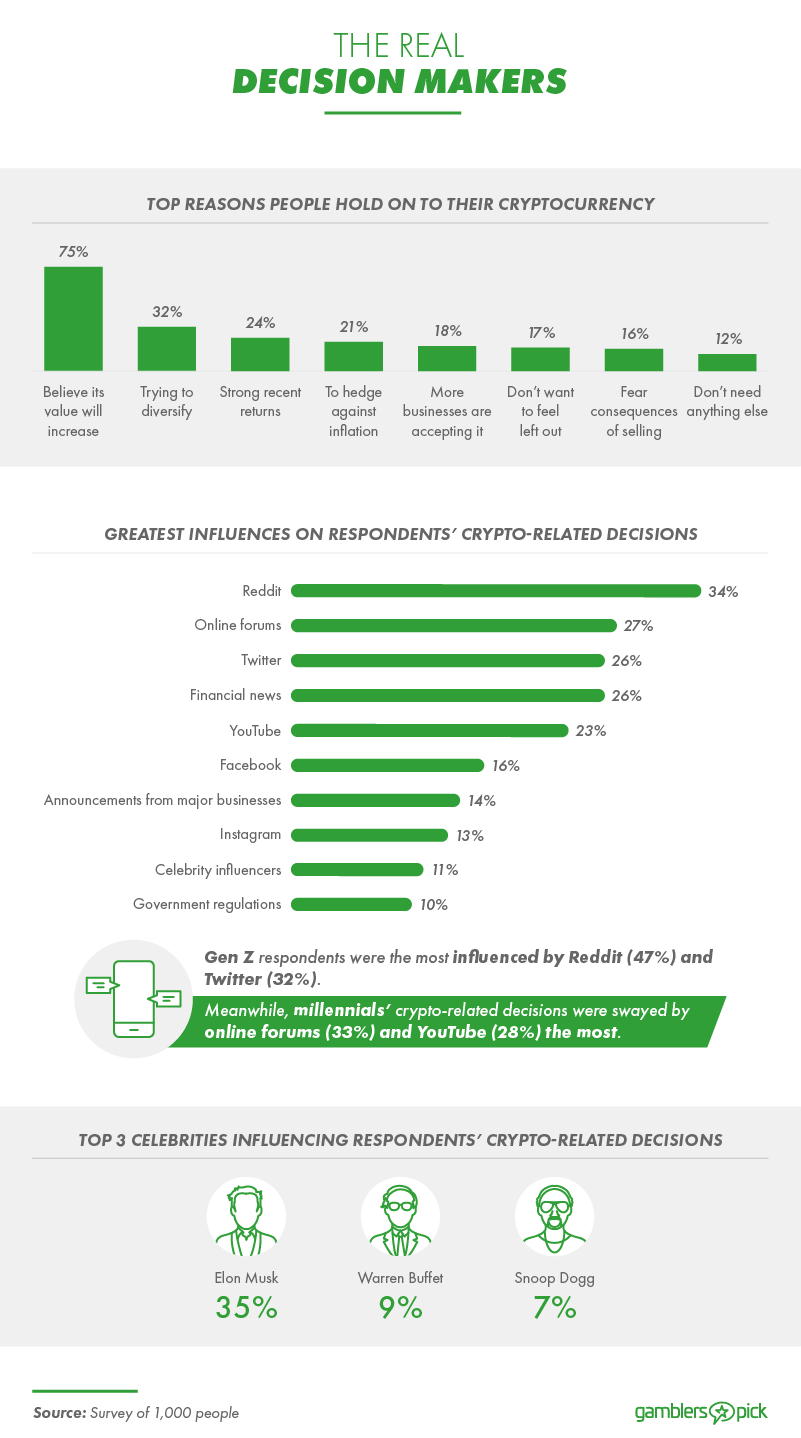 People taking on debt or avoiding critical purchases may ultimately have the last laugh: Three-quarters of people holding on to cryptocurrency said they believed it has much more value to gain. About a third of respondents said they held on to their cryptocurrency simply to maintain a diverse portfolio.

Decisions on how and when to invest were made mostly after consulting Reddit, with over a third of crypto holders getting their information there. While not all information on the site is verified, the world has recently seen the power that Reddit can have over the financial industry. The only source more influential was a single individual – Elon Musk –whose tweets have been known to impact Bitcoin greatly. In one instance, a tweet from Musk plummeted the price of Bitcoin to below $30,000 – a low for this fluctuating currency. 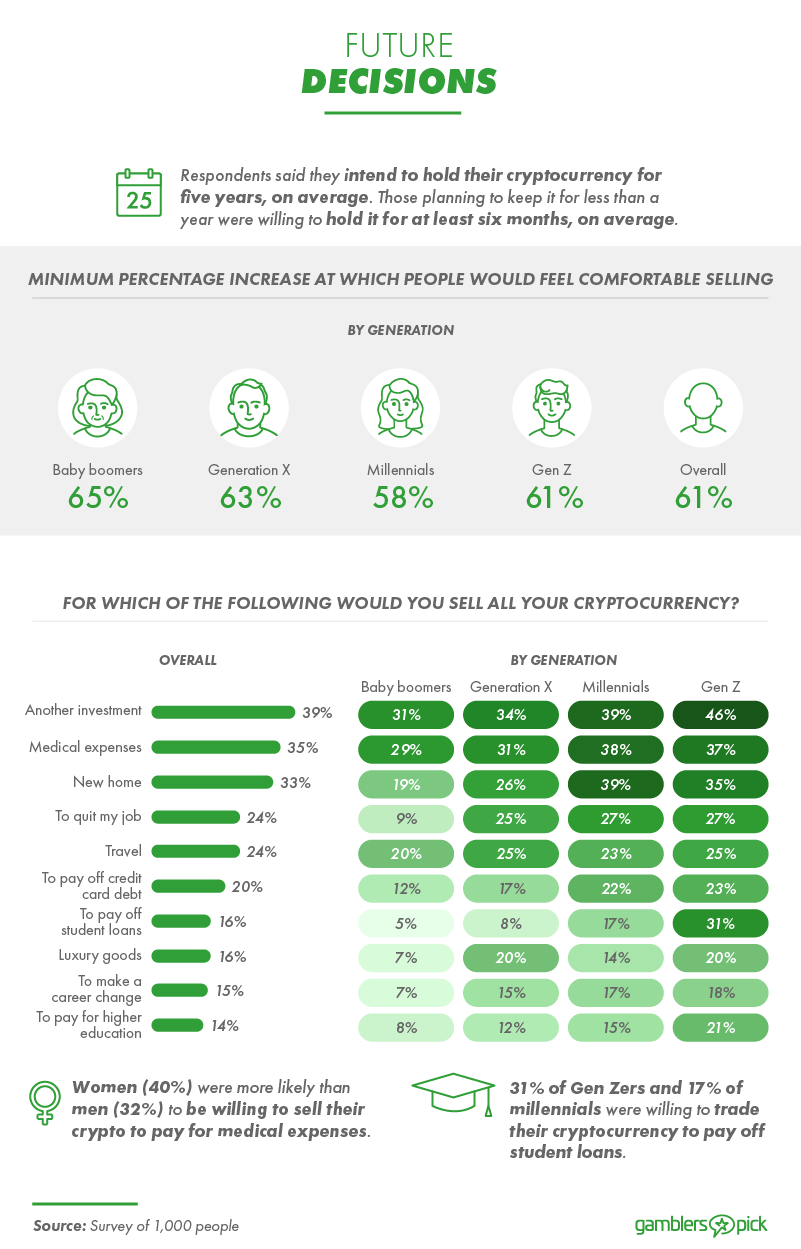 On average, respondents planned on maintaining their crypto balances for another five years. That said, enormous increases in price would certainly sway a few to start selling. Overall, respondents agreed that a 61% price increase in bitcoin could cause them to sell. Baby boomers, however, had the highest threshold for selling: This generation wanted a 65% increase before they sold.

Respondents proved that there are more costs involved in investing in cryptocurrency than just the dollar amount. They were often investing in lieu of life-improving purchases, paying down credit card bills, or even covering medical expenses. Men and baby boomers were the most likely to borrow in order to continue financing crypto.

In the future, most anticipated doubling down on aggressive decisions like these. Few would sell everything even for a new home or being able to quit their jobs. Of course, they felt their decisions were the right ones, as three-fourths said their primary motivation was an anticipation of a solid return on investment. For most, a 61% price increase would cause them to sell what they had. For others, diamond hands were the most valuable asset of all.

Joe Mercurio, a project manager at Gambler’s Pick told The Fintech Times, “As people continue to find ways to grow their finances, cryptocurrencies and NFTs aren’t usually the first things to come to mind. Some even feel that borrowing money and going into debt to grow their crypto is a worthwhile investment. Nearly 1 in 6 millennials have skipped credit card payments to grow their cryptocurrency holdings and 3 in 4 crypto holders believe their crypto still has much more value to gain.”

“Since the value of cryptocurrencies fluctuates daily, we found investors are hesitant to cash out their investments, even if the money was needed to pay an outstanding bill or payment. Surprisingly, 1 in 3 investors would not cash out their crypto investments to make critical payments, such as bills or emergencies.”

The post 38% Of Americans Surveyed Skipped on Paying an Important Bill To Hold Their Crypto appeared first on The Fintech Times.