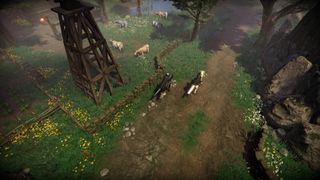 Looking for some starter tips in V Rising? The newly launched survival-crafter may not be the most fulfilling vampire game around, depending on whom you ask, but it’s still pretty fun to establish your spooky castle, and turn unwary humans into your undying thralls. The game is really well-tutorialized for an Early Access game, walking you through a series of steps that’ll show you how most things work.

But when jumping into a new crafting game, it’s always useful to know what resources you should prioritise so you can establish a base and upgrade your equipment most efficiently. That's certainly the case in V Rising, since your “equip level” is what determines your HP, and the level of prey you can expect to hunt down.

In this V Rising resource starter guide, I’ll go through seven important early game items to grab or craft. These will help you lay the foundation of your castle quicker, upgrade or craft better weapons and armour, and help you get your first vampiric servant.

V Rising is pretty good at guiding you, but there are a few resources it doesn’t explain how to get. Whetstones, for example, are vital in constructing the grinder, which lets you create stone bricks for use in your vampire castle. The grinder also produces the byproduct, stone dust, which you can combine with copper ingots in the furnace to create more whetstones. However, you need to defeat Grayson the Armourer using the Blood Altar to get the recipe.

Without a grinder or stone dust, you’ll have to head out into the world to find your first eight whetstones. Explore the Farbane Woods until you find bandit camps, the bandit copper mine, or the bandit armoury. If you head inside and defeat the enemies, you should be able to find whetstones contained in chests.

Your level is V Rising is determined by your equipment, so blueprints for new weapons and armour are extremely valuable. You find these in bandit camps and by defeating bosses, but you can also research a random blueprint at the research desk if you gather 50 paper. Most human enemies you defeat drop paper, so it’s well worth collecting all you can when attacking encampments in order to get that free bit of tech. Cloth and Coarse Thread are also dropped from bandits and human enemies, and since they allow you to craft better armour, are well worth collecting.

As the first ore you'll likely encounter in V Rising, copper is used for all sorts of things. You can craft superior copper weapons, better armour, whetstones, and you can even use it to create fancy garden fences. Upgrading your equipment to copper will help raise your overall level, letting you go after tougher V blood foes. The best place to get copper is at the Bandit Copper Mine in the Farbane Woods. You can also find Errol the Stonebreaker here if you want his Aftershock ability, and the diagram for the Big Stash chest.

There are lots of spooky-looking plants in V Rising, each with their own particular purpose. Some can be used to create concoctions at the alchemy table, while others are used to summon undead enemies from tombs once you’ve built some. But since a lot of plants only grow in very particular places, gathering them can be a real hassle. That’s where seeds come in. You can find seeds in all sorts of different places and bring them back to plant in your own territory. However, if you want to take farming seriously you should defeat Polora the Feywalker using the Blood Altar to unlock Garden Floors.

Wood and stone are two of V Rising’s basic resources, but you’ll want to convert them into planks and bricks as soon as you can. The tutorial has you build a sawmill to make planks early on and you’ll use them to craft weapons and build your castle. But you also need a grinder to make bricks.

Since you’re going to need lots of bricks and planks, you should prioritise building an enclosed workshop to boost sawmill and grinder productivity. If you hunt Grayson the Armorer for his whetstone recipe, you’ll also unlock workshop floors which will boost efficiency even further.

One of the first materials you encounter in V Rising is animal hide, and if you have the Tannery, you can use it to craft leather and make some better armour. But to unlock the Tannery you have to defeat Keely the Frost Archer at the Bandit Trapper Camp in north-east Farbane Woods. She isn’t particularly tricky to best and once you do you’ll finally have a use for all that animal hide you’ve been lugging around.

While defeating enemies you’ve probably come across Tainted Hearts, before hurling them into your press to extract that sweet, sweet blood essence. But Unsullied Hearts are much rarer and more important. These are only dropped by high-level mobs and bosses, and four of them can be used to create greater blood essence, a key material in getting your very own human thralls. Once you unlock the servant coffin, you’ll use greater blood essence to build it, so make sure you hold onto your Unsullied Hearts. Just don’t eat them or anything.