The bold creation will feature a unique diamond-shaped four-seat layout and a carbon-fiber structure. Six electric propulsion motors, meanwhile, will produce a power output of roughly 2,400 horsepower. Oh, and it will set its prospective owners back $3 million. Only 105 units will be made, with production scheduled for 2026.

An EV designed with 'private jet luxury' in mind

So far, Hennessey has only released rough sketches, hinting at what the hypercar will look like. At $3 million, the design is, unsurprisingly angled towards providing a luxury experience. In its statement, the company says the Project Deep Space EV will "bring private jet luxury to the hyper-GT segment" and that it will be the world's most expensive EV.

"Hennessey has spent more than 30 years building some of the fastest and most exciting vehicles in the world," said company CEO and founder, John Hennessey. "This mantra will continue for our next 30 years by introducing the world’s first fully electrified, six-wheel-drive hyper GT. We believe that 'Deep Space', with six electric motors combined with six driven wheels, could be the world's quickest accelerating four-seater from zero to 200 mph (320 km/h)!"

As demonstrated in the sketch below, the unique seating configuration allows two passengers to sit just behind the centrally positioned driver, while a fourth passenger can lie down at the back — the question is whether they would have to wear a harness instead of a seatbelt. The vehicle will be roughly 20 feet long  (6 m) and the battery will be mounted under the floor between the front and middle axles. 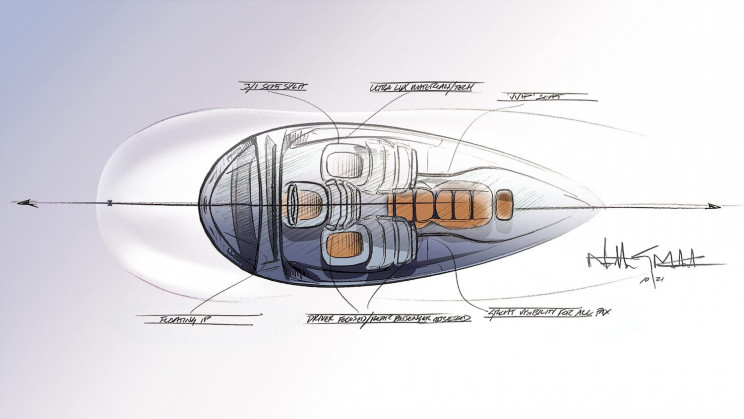 In an interview with Car and Driver, John Hennessey said the company is "not ready to talk about [range] yet," though he did say he believes, "Project Deep Space will have a range greater than what currently exists."

Project Deep Space forms a part of Hennessey's recently-announced 10-year production plan, which will see it introduce three new all-electric vehicles, including the Venom F5 coupe, a 1,817 bhp hypercar decathlete. If the sketches are anything to go by, we can't wait to see a more fleshed out design for this most lavish of electric vehicles.