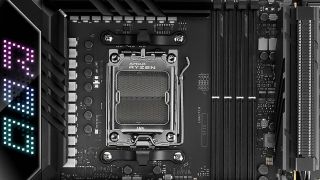 AMD's AM5 platform is set to erupt onto the desktop in the fall, and not only can we expect X670 and B650 motherboards to arrive with the company's Zen 4 processors at that time, but also a brand new X670E (the 'E' stands for 'Extreme') chipset. This chipset will find its way into the biggest and baddest motherboards from AMD; delivering maximum overclockability, massive VRMs, and PCIe 5.0 all over.

To understand what X670E can deliver we have to first look at the AM5 socket. This is an entirely new design for AMD and one that will see the company ditch its pin-grid array (PGA) chips in favour of land-grid array (LGA) ones. The switch will see AMD more like Intel's existing lineup with the contact pins located on the motherboard—1,718 of them in AM5's case.

AMD's David McAfee says the change to LGA also helps "to drive more power and greater signal integrity for all of those high-speed IOs."

That also means you'll have to be extremely careful not to jam your thumbs into your X670E, X670, or B650 motherboard in a few months' time.

A few other key points about AM5: AMD's designed the socket to deliver up to 170W natively, which should see a decent amount of headroom for overclocking without any extra juice, though it's likely some motherboard manufacturers will over-spec at least a handful of high-end models.

"The socket AM5 ecosystem also features an all-new SVI3 power infrastructure. This brings multiple advantages to the platform, such as support for additional power phases, for that higher power delivery into the motherboard, finegrain power control, and significantly faster voltage response capabilities," McAfee says.

PCIe 5.0 has also made the cut, though the exact amount of PCIe slots/M.2 slots will differ between motherboard and chipset for Ryzen 7000-series chips. Generally, B650 and X670 will offer at least one PCIe 5.0 M.2 slot, while the latter will likely offer a single x16 PCIe 5.0 slot for graphics. That's optional and not a requirement, however.

X670E motherboards are guaranteed to offer both PCIe 5.0 graphics and SSD slots, though again the exact configuration will be up to the mobo manufacturer. They have up to 24 lanes of PCIe 5.0 to play with, depending on the CPU in the socket, so how they divvy these out will depend on the make and model of the motherboard.

DDR5 memory will make its way onto AMD's platform with AM5, which will see the red team match Intel for memory feed and speeds.

And perhaps the best bit of it all is that CPU coolers built to work with the popular AM4 socket today will also be compatible with AM5. That should save you a bit of cash if you're hoping to upgrade to a Zen 4 chip down the line, but it's also great.

So that's the AM5 platform, and X670E motherboards will essentially offer the best of what's on offer in a single motherboard.

The most information we have on what an X670E motherboard will actually look like comes from Asus with its ROG Crosshair X670E Extreme. Yes, it's doubly extreme.

What makes the Crosshair so gnarly? 20+2 VRM rated to 110A, for one. That's plenty of power for some serious overclocking and AMD has said its dual-channel DDR5 will come with the most extreme overclocking headroom. We don't yet know how much overclocking capability there will be in AMD's Ryzen 7000-series, though.

Connectivity shouldn't be an issue, anyways. The Crosshair offers two M.2 slots, upgradeable to five M.2 with two M.2 expansion cards, of which four will run at a full PCIe 5.0 x4 bandwidth. There are also two PCIe 5.0 slots, although it's a bit slim on overall slots. Something to keep in mind if you plan to plug more add-in cards into your Zen 4 machine.

As for the Crosshair's competition, there's also the double extreme Gigabyte X670E Aorus Xtreme, though the company hasn't outlined that board in as much detail yet. Other X670E motherboards include the ASRock X670E Taichi, Biostar X670E Valkyrie, and MSI MEG X670E Ace, with surely more to follow.

With these motherboards, AMD is once again cementing its place in the high-end, ultra-enthusiast gaming market. The red team is keen not to slink back to its budget processor roots anytime soon. Though it's worth saying that the motherboard that most gamers will want/actually need is probably nowhere near as extreme as the Crosshair above: it's guaranteed to cost a pretty penny, and a sensible B650 or X670 is sure to be a better buy on the day.

Jacob earned his first byline writing for his own tech blog from his hometown in Wales in 2017. From there, he graduated to professionally breaking things as hardware writer at PCGamesN, where he would later win command of the kit cupboard as hardware editor. Nowadays, as senior hardware editor at PC Gamer, he spends his days reporting on the latest developments in the technology and gaming industry. When he's not writing about GPUs and CPUs, however, you'll find him trying to get as far away from the modern world as possible by wild camping.