From AI to Blockchain, Emerging Tech is Here to Stay: Major Highlights from the TechCabal TownHall Event

AI, Blockchain, VR can all be very complex to understand. But at the TechCabal Townhall event which held on Friday, key players in the Nigerian tech space lent their voices to the discussion as they tried to explain these terms and their use to attendees.

Tagged the TechCabal Townhall: Emerging Tech, the event brought together entrepreneurs, stakeholders and innovators to examine how businesses, individuals and Africa can maximize the benefits of emerging technologies, specifically AI and Blockchain.

Held at Zone Tech Park in Lagos, the Techcabal townhall indeed explained these terms to its hundreds of attendees and it was no surprise that there were lots of questions surrounding these emerging tech.

Beyond that, they were also product showcases from startups playing in the space. This included Patricia (who just launched a debit cryptocurrency card), Quidax, DataScience Nigeria and AI Saturdays.

Beyond those, here are major talking points from the tech event.

Emerging Tech is Here and Africa needs to Join the Race

Across the continent, African businesses and companies are beginning to leverage Artificial intelligence across board. Businesses now use AI chatbots as the tech is becoming more popular. Other sectors like agriculture and e-commerce also use AI in their operations.

Also there’s an increasing number of blockchain use-cases, especially in financial services and cryptocurrencies. There’s a huge surge in startups running the space like Buycoins, Patricia, Luno and several others.

"Africa needs to join the race of Emerging Tech as it has what it takes to bridge the gap between Nigerian and the developed world."#TCEMTech #TCTownhall pic.twitter.com/EjuyG7jarz

As harsh as it may sound, it was generally agreed that Blockchain has not been applied as widely as it should. So far, it only has major use cases in finance, as such entrepreneurs building other solutions on blockchain might persevere for very long before they succeed.

All this points to the fact that emerging tech is here to stay, however we are too far behind to scale the impact. Africa needs to join the race as emerging tech has what it takes to bridge the gap between Nigeria/Africa and the developed world. Startups also need to do more as regards making innovations that have real impact.

Data is the Foundation for Artificial Intelligence

In order to get the best opportunities from fields like Artificial Intelligence (AI), there’s a need for data to be readily available.

It is important that every business incorporates AI into their operations to scale. To do this they need to collect the right data. This may require them changing their definition of data from just words and numbers.

"There's so much benefit from Data and AI, however Data is the foundation for AI"
– @EmekaOkoye, CEO, Cymantiks. pic.twitter.com/ptnTd9BRNu

As such Data is the foundation for AI and it is in everything. However privacy of these data must be respected and they must be used in a way that doesn’t violate the privacy of their owners.

"For now, AI is hype. Everybody is talking about it, very few people are doing something about it.
For people to get benefits from AI, they need to take data seriously"
-Emeka Okoye#TCTownhall #TCEmTech pic.twitter.com/uOiilJWHTt

Also, availability of data is key, hence there’s a push for Open Data. According to Emeka Okoye of Cymantiks, “it is until Africa embraces Open Data that AI will fully kick off on the continent.”

The Government Has a Role to Play

To fully immerse Africa in the game of Emerging tech, everyone has to be involved and this includes the government. The government needs to create design spaces to fill in for skills gaps as well as make ready regulations to enhance innovation and not stifle it. 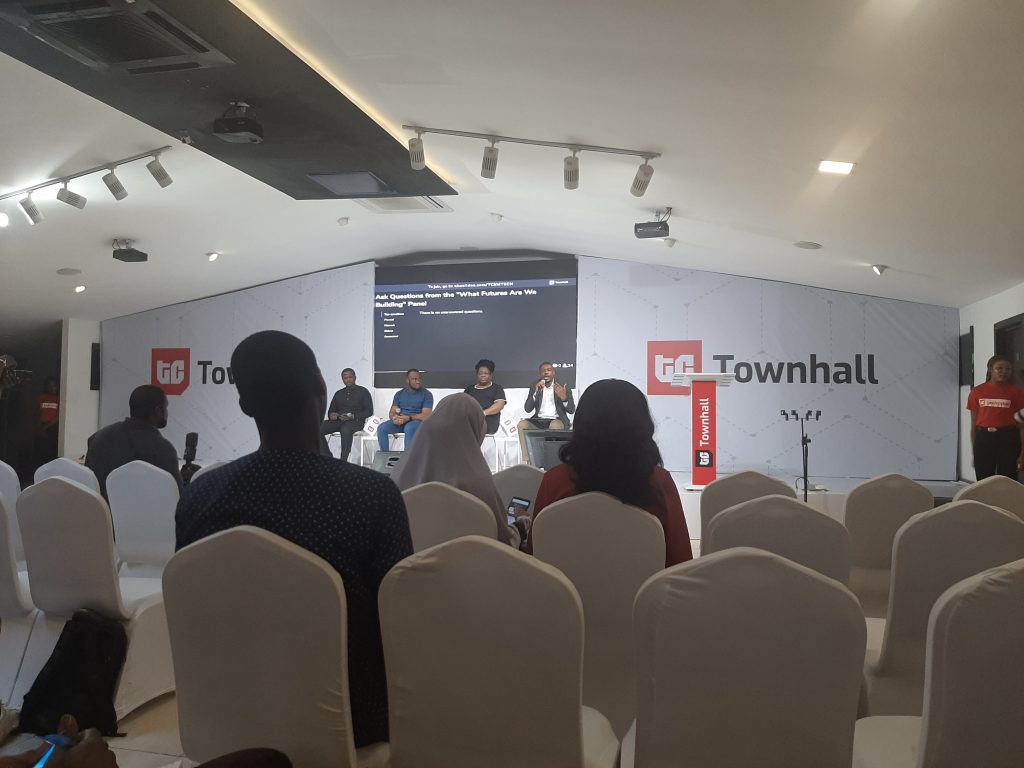 A panel session at the TC Townhall event held on Friday.

A use case will be that of the recent Lagos state Okada ban, that has savaged the operations of mobility startups and the livelihoods/mobility of several Lagosians.

Since Emerging tech is relatively still in its cradle in Africa, it is important that governments take their time to understand the technology in order not to cause more harm than good.

Uzoma Nwagba challenges the government and regulators: "The government needs to get itself informed, it is only then that the kind of thinking in this room will be commonplace"#TCTownhall #TCEmTech pic.twitter.com/UEwz7nJUDz

Also, African governments need to help in massive improvement of the infrastructural deficits that still impede the growth of AI in Africa.

Emerging tech is here whether we like it or not. And it will increase productivity and take away human elements like mistakes and corruption – even if not in their entirety. However, entrepreneurs and relevant stakeholders need to key into the movement.

And as an advice, buy a bitcoin.

The post From AI to Blockchain, Emerging Tech is Here to Stay: Major Highlights from the TechCabal TownHall Event appeared first on Technext.