How Koniku, a Nigerian-founded biotech company, wants to revolutionize disease detection in the world

“Today is the day we start a company,” Oshiorenoya Agabi said to himself, as King Sunny Ade’s Koniku filled the airwaves.

Agabi has been developing a technology that takes data from human smell to detect disease in human bodies for seventeen years. On this random work day at Imperial College London while doing PhD research, he’d be inspired by the legendary Nigerian musician to define his purpose.

Koniku means ‘immortal’ in Yoruba, one of three predominant languages in Nigeria. Founded in 2017, the company is based in California where Agabi runs a team of engineers and scientists building a now-and-future biotech pioneer.

No, the company is not creating an immortality machine. But Koniku’s plan to conjure science and technology to preserve human life is in full swing. If life can be preserved by early disease detection, if remote outbreaks can be prevented from becoming pandemics, Agabi hopes Koniku becomes the world’s ultimate life saver.

A breathing device that can smell

“The new age we are getting into is the age of biotech. It will change what it means to be human,” he says.

It’s a February evening at a cocktail organised by Platform Capital, an investment advisory and venture capital firm in Lagos. Platform invests in tech companies through its unit called Uniform Group.

Agabi is an imposing presence on stage, energizing an audience of business people, academics and politicians with the story of Koniku’s founding; how Nigeria must invest massively in healthcare; why Africa cannot be left behind in using emerging technologies to radically advance human possibilities. 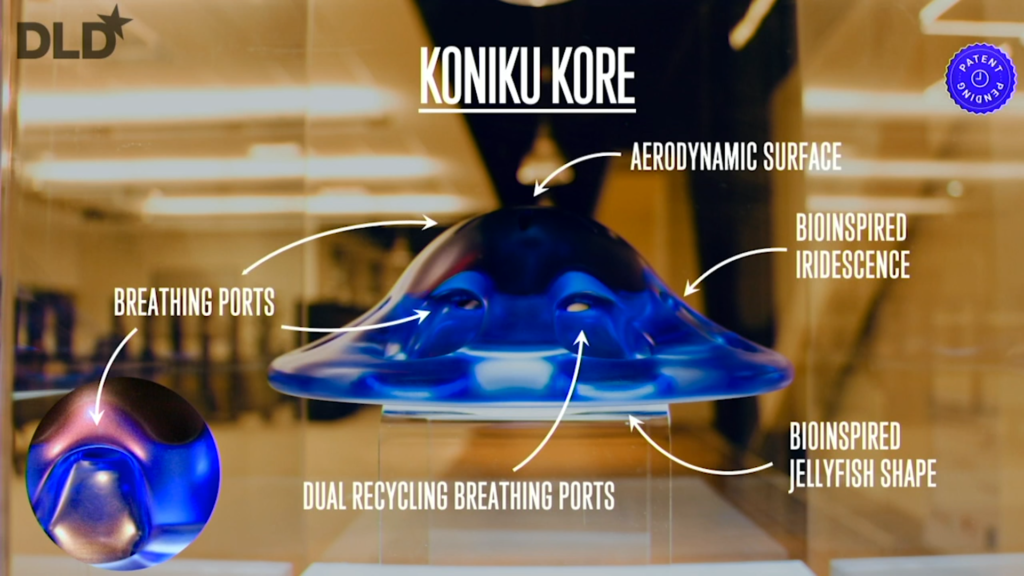 A sketch of the Konikore presented by Oshioreonya Agabi at the January 2019 Digital Life Design conference. Image credit: DLD on YouTube

Konikore, his company’s flagship device, contains a chip that merges living genetically modified brain cells and traditional silicon. The technology works on the basis that silicon alone is insufficient for processing and interpreting data from human smell.

This possibility, Agabi says, is founded on published literature; by detecting about four Volatile Organic Compounds (VOCs), you could make an educated 80%-correct guess on the presence of influenza in a human’s body after taking their breath.

But the key insight that makes Konikore sensible is this: while there are branches of artificial intelligence that interpret images (computer vision) and sound (natural language processing) for predictive analytics, the process for interpreting smell is not straightforward.

Koniku’s vision with Konikore is, therefore, to augment silicon with cells from mice to produce the capacity needed for machines to ‘breathe’ and ‘smell’. The input data for this process is Volatile Organic Compounds that the body gives off when we have certain diseases.

When the device detects a given set of these compounds in a human, it is able to – aided by a complex interplay of algorithms – tell what disease that person is present.

Konikore will be able to detect a range of present diseases, from lung cancer to COVID-19, Agabi says. But what would make it outstanding is to an ability to detect diseases that are yet to be discovered. How will this happen?

Again, the company’s working thesis is that every disease has key organic substances that serve as its biomarkers. When a disease has been broken down to the most important VOCs that identify it, Koniku will be programmed to read, detect and diagnose.

Similar to how Android phones are updated when new operating systems are released, Konikores will receive new disease information via an Internet of Things facility.

The device’s diagnostic capacity will benefit from having several devices connected from several patients at different locations. This way, data from different patients can be compared and the collated information will improve performance across board.

“When you have a large database from a lot of patients, you have the chance to anonymously check patient data against patient data to arrive at the correct diagnosis,” Agabi says.

The pool, he hopes, could contain data from up to 10,000 patients. Every Konikore user will have an opt-in system to choose or decline to share their data with anyone, forestalling any privacy violations.

Koniku for health and other applications

Agabi’s invention will be applied in various fields from agriculture and healthcare, to military and airport security.

He says the Koniku Kore is able to detect explosive material like TATP in 2 parts per billion just by exposing the device to air. (TATP, triacetone triperoxide, was an active ingredient in the Paris bombing of 2015)

Validation for Agabi has come from a military outfit that wrote Koniku its first check of $10 million, though he insists he offers his services for defense not offense. Other early Koniku clients include Exxon Mobil, Procter & Gamble, and BASF – a global chemicals manufacturer.

In addition to the above, Koniku’s technology has been used at the Singapore Changi Airport, Agabi says. In the present climate of COVID-19 anxiety, such systems could make a difference for how an infectious disease spreads within a country and beyond. 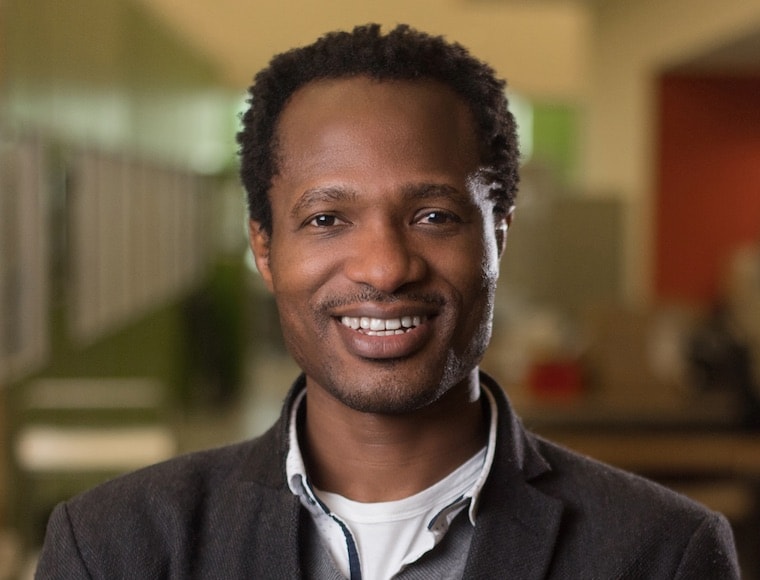 Koniku has raised over $6 million in venture financing, receiving the backing of VCs in Silicon Valley. Over $17.5 million have been received in revenue from contracts, with a projection to accrue $200 million in four years, Agabi says.

Patronage from FMCG companies and airport security are encouraging signs. But Agabi is particularly eager to scale adoption in healthcare. He is optimistic about viability in places like Nigeria where access to health services are at a premium where available.

World Health Organisation data shows that over 30% of WHO Member States have less than 10 medical doctors per 10 000 population. The bite is more intense in Africa: while the continent bears more than 22% of the global disease burden, Africans have access to only 3% of health workers and less than 1% of the world’s financial resources.

If it works as anticipated, Konikore will democratize healthcare access in a similar way to how mobile phones liberalized access to communication. But Agabi does not expect human-mediated clinical medicine to become obsolete as a consequence.

“This device will be a first-stage screening that gives a high degree of certainty. We will work hand-in-hand with existing systems and doctors. The goal here is not to replace diagnostic systems but rather to complement them. We see a space for everybody to work together to deliver more value for the customer.”

He wants to have the device in every home. The ideal is that your Konikore becomes an after-bath companion with which you do a first-stage health check.

A device with these features sounds expensive. But Agabi says his company is targeting the global middle class: “If you can afford a mobile phone, you can afford our device.”

His presentation at a Digital Life Design conference in October 2019 put the price of one Konikore at $60.

While VOC detection is an emerging industry with high growth potential, the fusion of biology with technology always draws skepticism. In the food world, there is ongoing backlash against genetically-modified organisms. Genetically modifying animal cells for healthcare will raise eyebrows too.

[Read: Rwanda must pick a side in its GMO debate]

At a press briefing before the Platform cocktail, I asked Agabi if there are ethical concerns that we should prepare for with regards to Konikore; where he gets his cells from and how he hopes to convince Nigeria’s authorities on beneficence.

Apparently, Koniku sources its cells from a manufacturing facility in Silicon Valley where they are able to grow the cells en masse.

Koniku doesn’t yet have the approval of the US Food and Drug Administration to deploy Konikore, but Agabi is ready to engage Nigerian stakeholders to uphold standards when time comes.

Another reporter asks if clinical trials have been done to certify Konikore for use. Agabi’s response is that while there have been no trials directly with Konikore, there are documented studies on breath diagnostics.

In one particular trial, 17 diseases were diagnosed through a process similar to what Konikore will follow.

What the trials established is that compounds from breath are useful, reliable biomarkers for calling diseases.

Agabi is confident in his scientific rebuttals to fears that people may have about Konikore’s usefulness. On a scale of Elizabeth ‘Therano’ Holmes to Steve ‘Apple’ Jobs, he surely wants Koniku to tend to and surpass, the latter.

It would be a massive achievement. Agabi grew up in Lawanson, an underdeveloped area in rural Lagos, going on to earn a Bachelors in Physics from the University of Lagos. Over the last two decades, he has moved from Nigeria to Switzerland, London and Silicon Valley, earning high accolades in science from advanced degrees to patents.

Building Konikore is “the most challenging thing I have done in my life,” he says to the cocktail audience, with his attentive parents directly under his gaze. Time will tell whether this challenge could spur a revolution in rapid disease detection in the world.

The post How Koniku, a Nigerian-founded biotech company, wants to revolutionize disease detection in the world appeared first on TechCabal.

This free streaming service has the local channels others lack

Facebook renames itself ‘Meta’ in preparation for the metaverse

These 17 Safari extensions will change how you use your iPhone

Why Hollywood is suddenly embracing the blockchain, crypto, and NFTs

Move over, Instagram influencers: Welcome to the era of the independent creator