At the start of 2021, Amazon founder Jeff Bezos caught the world off guard when he announced that he would step down as the online retailer's CEO. Bezos will take over as Amazon's executive chairman and continue to be the company's biggest shareholder.

Marking the end of an era in the realms of "big-tech," this transition does not necessarily mean we will see less of Bezos. Though there are a handful of reasons why the Amazon founder is taking a step back from the role, his aerospace brainchild Blue Origin may be a leading factor.

Over the past couple of years, Bezos has unveiled a sweeping and ambitious vision for humanity's future in space. Blue Origin will help bring this vision to fruition. Like a handful of other privately wealthy individuals, the billionaire has invested a large amount of his own considerable wealth to bring humanity closer to a future in space. 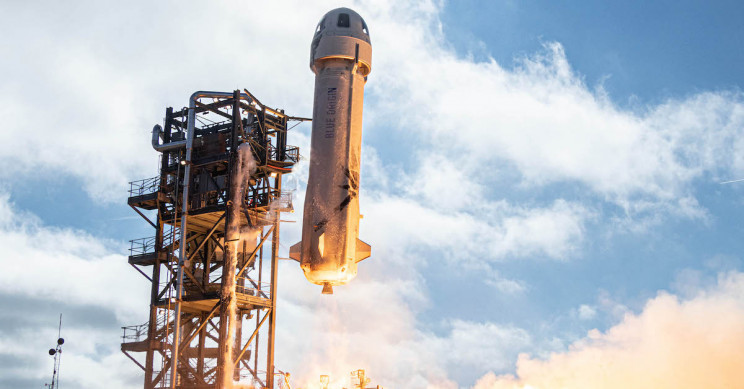 All of these figures want to make space travel safer, more reliable, and affordable. However, Blue Origin's path and overarching vision for space travel skew from the other companies involved in this space race. Much of the company's attention is focused on lunar travel, lunar bases, and down the road, space colonies.

What was once a secretive research company has blossomed into a viable aerospace company with proven rocket launch systems. Bezos and the people closest to him have been vocal about the founder's passion for space travel, with some people going as far as to say that Amazon was a means to end.

What Blue Origin has accomplished so far is impressive. Nonetheless, the aerospace manufacturer has a way to go before closing the gap between some of their other competitors, such as SpaceX. In fact, Blue Origin is a curious case.

Bezos clearly has the wealth and resources to keep his aerospace dreams alive. But relative to its competitors, Blue Origin is moving at a much slower pace. It is not only fascinating to see how far the company has come, but how far (to the Moon?) it will go in the coming years. Regardless, you are likely to see much more of Jeff Bezos in the coming years.

As of writing this article, the tech leader has a net worth of $193 billion, just edging out Elon Musk as the richest man in the world. Far before the days of Amazon warehouses, as a teenager in the 1970s, Bezos demonstrated a strong fascination with technology. Even more so, as explained in a 2004 profile of Bezos for Wired Magazine, the curious teenager had had a strong passion for space. He has echoed this sentiment throughout the decades.

However, Bezos was not interested in suiting up and piloting a rocket into the final frontier. The Amazon founder wanted to get into space as an entrepreneur. He believed computer science would help him create the business needed to launch his aerospace dreams. Just six years after founding Amazon, he quietly founded the company Blue Origin in 2000.

Blue Origin's motto is gradatim ferociter, a Latin phrase that means "step by step, ferociously"; a phrase that directly reflects the company's ambition. In its early days, Jeff Bezos's company was secretive. The start-up's general long-term goal was to develop a vertical-takeoff, vertical-landing rocket ship that could deliver passengers into suborbital space. Notwithstanding, this goal has clearly evolved over the years alongside the rapidly changing aerospace industry. Who is funding this venture? Who owns Blue Origin? Jeff Bezos.

The aerospace company is 100% privately funded by the richest man in the world. Based on a report by the New York Times, the tech CEO sells $1 billion of his own Amazon stock each year to finance Blue Origin.

Currently, the space technology company is located in Kent, Washington. The recently opened headquarters covers  21,367 square meters (230,000 square feet) and sits on over 30 acres of land. The company also has a rocket engine test facility in Texas that doubles as a suborbital rocket launch site. They are also working on a new orbital facility in Cape Canaveral, Florida.

Mars is not our Plan B

Over the decade, the colonization of Mars has been a focal point for the future of both private and public space travel. SpaceX's Elon Musk has been a huge proponent of the goal of travel to (and colonization of) the red planet, with the company's long-term goal being to make humans an interplanetary species.

This is one area where the goals of Musk and Bezos differ. Yes, Blue Origin aspires to create, "technologies to enable human access to space at a dramatically lower cost and increased reliability," but Mars is not in their line of sight. At least not in the immediate future. Blue Origin's founder believes we should work to preserve our planet rather than looking for another.

To improve our planet, the company believes that harvesting resources from nearby asteroids, Near-Earth Objects, and even the Sun could be the key to a more sustainable future. Bezos has described the idea of having a Plan B to Earth as "un-motivating." Furthermore, Bezos has even compared Mt. Everest to Mars, saying the former would be a "garden paradise" compared to the red planet.

The company's resources are currently devoted to the ongoing race to the moon, reusable rockets, suborbital tourism, lunar bases, the utilization of the natural resources found in space, and, maybe, much farther down the line, the development of large, cylindrical habitats in space where people could live. Space exploration and interplanetary research are essential to Blue Origin. Just don't expect them to leave Earth in the rearview mirror anytime soon. 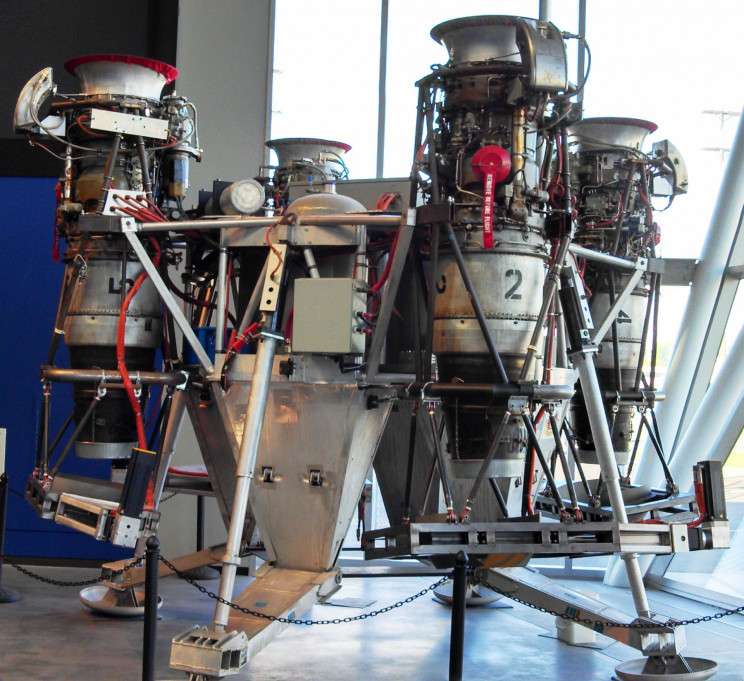 During its early days, much of what people knew about Bezos's Blue Origin could be attributed to mandatory disclosures from the Federal Aviation Administration and NASA. The aerospace company's first flight test vehicle was the Charon, a vehicle named after Pluto's moon.

Charon was powered by four vertically mounted Rolls-Royce Viper Mk. 301 jet engines. Tested in 2005, the low-altitude vehicle was developed to explore autonomous guidance and control technologies as well as the company's processes to develop its later rockets.

The following year, Blue Origin went on to test its single-stage sub-orbital test vehicle, the Goddard. Compared to the Charon, the Goddard used 9 BE-1 engines. Both test flights were successful, laying the groundwork for future projects at the company.

One of the rocket-making company's most important flagships is its reusable suborbital system, dubbed the New Sheppard. A BE-3PM engine powers the 60 ft (18 meters) reusable rocket.

It is comprised of two parts and features a crew capsule that can comfortably facilitate six people. After setting the crew capsule on its set trajectory, the booster is designed to return to Earth and perform a vertical landing. Both parts of the vehicle are intended for recovery and reuse, dramatically reducing the costs of space travel.

First taking flight in April 2015, the New Shepard rocket has flown over a dozen times. Blue Origin plans not only to use the suborbital system for experiments on the edge of space but plans on using the New Sheppard for space tourism in the near future. Not much is known about the ticket prices for the first commercial Blue Origin suborbital trips, but most people estimate that costs are going to float around Virgin Galatic's $250,000 a seat. The New Shepard program ultimately hopes to take six space tourists at a time on a sub-orbital flight which includes about three minutes of weightlessness.

The good news? Blue Origin believes that space travel will be available at a more affordable price, "over time." Hopefully sooner than later.

At the beginning of the year, Blue Origin successfully tested an upgraded capsule built for crewed flights. However, there have been no human astronaut tests with the rocket. In January 2021, Ariane Cornell, Blue Origin’s director of astronaut and orbital sales said, “We’re getting really close to flying humans.”

All eyes are now on the New Glenn this year

The company's new heavy-lift rocket, the New Glenn, is supposed to reach orbit for the first time later this year. Taking its name from pioneering astronaut John Glenn, the partially reusable rocket features a first-stage booster capable of landing back on Earth like SpaceX's Falcon 9. Powered by seven BE-4 engines, the rocket will launch from Cape Canaveral Launch Complex 36. Upon launch, the BE-4 engines will produce 17,100 kN (3.85 million lbs) thrust at sea level.

The rocket already has contracts to launch satellites for the Canadian Telecommunication company Telesat and the UK's OneWeb. Eventually, the rocket could bring Amazon's satellite service, Project Kuiper, into orbit. However, no dates have been given for this. 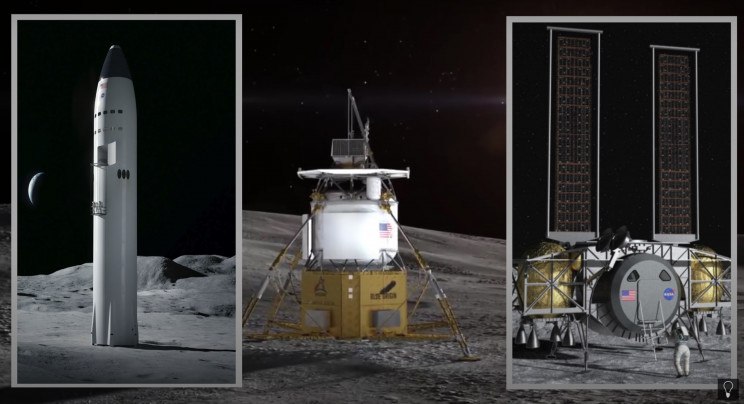 In 2019, Bezos presented his grandiose vision for Blue Origin to the public, which included unveiling new details about a large lunar lander, called "Blue Moon," capable of delivering up to 3.6 tons of cargo and scientific experiments to the lunar surface.

Bezos not only wants to send humans to the Moon, but he also wants to start building a lunar base there, believing that humanity's survival could be dependent on this feat. The project has evolved over the years.

The most recent lunar lander is currently bidding, along with SpaceX and Dynetics, to supply vehicles for NASA's expected mission to the Moon in 2024. The space agency is expected to narrow down the bidding to the top two choices later this year.

Massive space colonies could be part of Blue Origin's future 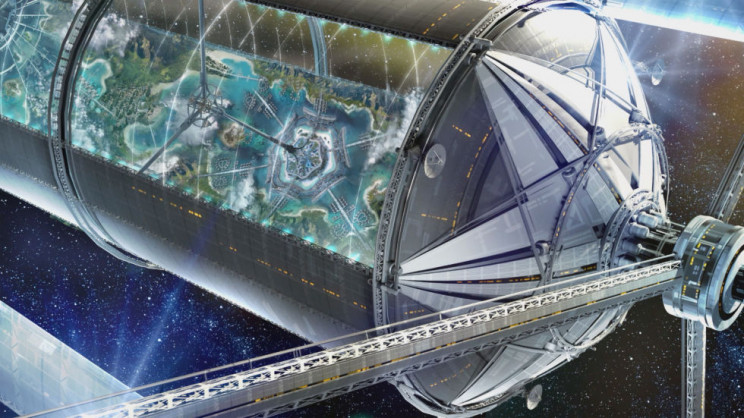 This is where ambition straddles science-fiction. That same presentation discussed above also unveiled a vision for space travel and habitation in the very distant future. According to this vision, the answer to humanity's earthly woes, such as lack of resources and overpopulation, lies not in other planets or moons but rather in artificial worlds or colonies in space, dubbed O'Neill cylinders.

Popularized by professor Gerard O'Neil in the 1980s, these free-floating, cylindrical space colonies would have access to ample amounts of solar energy and be capable of sustaining colonies of as many as 1 million people. They would be climate controlled, and include not only cities, but also farms, mountains, and beaches. Something like the last part of Christopher Nolan's Interstellar. 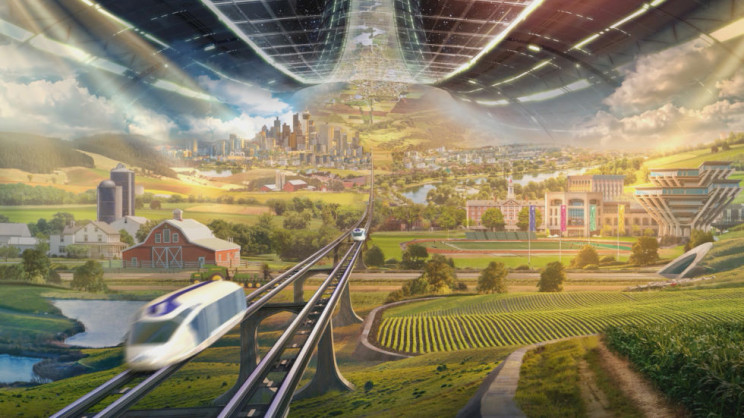 This idea is far off in the future. Nonetheless, Bezos has emphasized the importance of building the foundational road needed to reach these heights. He believes Blue Origin and some of his competitors could help humanity get there. Regardless, as we mentioned, compared to companies like SpaceX and Virgin Galatic, Blue Origin is a bit behind.

Blue Origin is testing its first heavy-rocket this year and still seems some way from a viable space tourism program. Bezos's newly-focused attention on Blue Origin and his vast personal resources could be what is needed to close the gap. Regardless, the billionaire space race is just heating up.