In what is the latest twist in a litany of manoeuvres, co-founder of Tizeti, Kendall Ananyi has stepped down as CEO of Tizeti. This follows allegations of sexual harassment levelled against the former CEO by communication strategist and former MEST cohort member, Kelechi Udoagwu.

The development was announced in a statement by Tizeti in which the company stated that Kendall will step down pending the outcome of an investigation it has already commissioned.

Kendall Ananyi has voluntarily stepped down as CEO effective immediately, during the period where the company will conduct an independent investigation into a sexual harassment allegation.

Last week tech strategist, Kelechi Udoagwu opened up on Twitter about a very inappropriate sexual gesture made to her by Kendall Ananyi who was, or shall we say still is the CEO of Tizeti Networks Limited.

While Kendall restricted his social media contacts and didn’t address the sexual harassment allegation immediately, his company released a statement promising to investigate the accusations levelled against its CEO.

Following outcry that it didn’t make sense for Mr Ananyi to remain its CEO while the investigation is carried out, Tizeti released another statement in a June 7 tweet, notifying the public that Mr Ananyi has stepped down as CEO to allow for an impartial investigation. 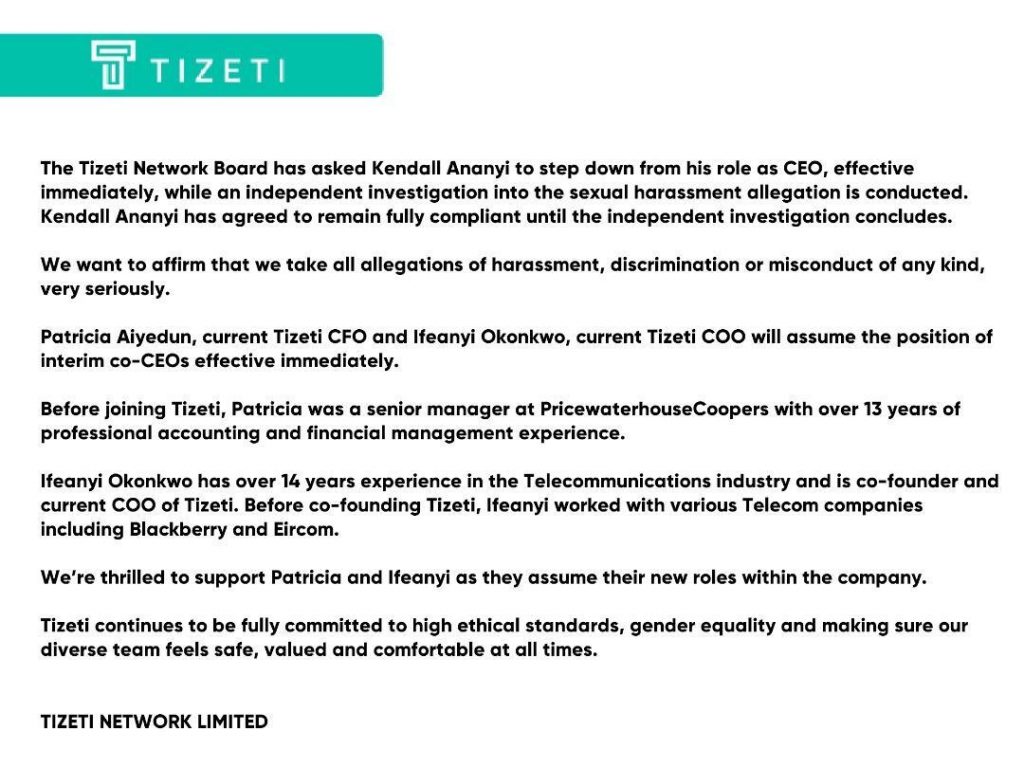 The former statement released on Sunday

But that tweet was pulled down shortly afterwards. No explanations were tendered and no further resolution was announced until now. Also missing from Tizeti’s timeline is the statement promising to investigate the allegation.

The spate of releasing and pulling down statements at will calls to question the degree of seriousness Tizeti is ascribing to the matter. For example, who is issuing these statements and from which office? Who are signatories to the statements?

There is also the inconsistency of the two statements released to announce Kendall Ananyi’s stepping down. While the first says the company is asking him to step down, this recent release claims he voluntarily stepped down. Thus, how did he voluntarily step down if he was been asked to?

The overriding questions therefore are, did the company just issue those statements to defuse the situation? Is there an internal struggle going on? Did the autocratic CEO-effect come into play as many people feared it would? Following the apparent confusion and a seeming inability to get the CEO to step down, could the public really trust the company to investigate its own founder?

Shortly after Tizeti pulled down its statement asking Mr Ananyi to step down, the CEO released his own statement which categorically denied ever having a mentor relationship with Kelechi and more importantly, ever sexually harassing or raping her.

Kendall Ananyi @kananyi, did you whip out your *thing* on me in a professional meeting where you were supposed to be advising me about my startup & transitioning into fulltime consulting?

Mr Ananyi did not expressly deny that he exposed his private part to Kelechi, neither did he deny that he asked for sex. Thus, if one considers the response as watery and generally lacking substance, they can hardly be faulted.

Co-founder of Jobberman, Opeyemi Awoyemi has vowed to stop using Tizeti network if the allegation proves to be true. MESTAfrica has promised to support Kelechi if she decides to escalate the matter. It will be interesting to see if Mr Ananyi is delisted as a mentor for its future programs. It will also be interesting to see how the tech community would react to this development.

Going forward, Tizeti announced that current Chief Financial Officer (CFO) of the company, Patricia Aiyedun and its Chief Operations Officer (COO), Ifeanyi Okonkwo will takeover as co-CEO’s of the company.

The post Kendall Ananyi ‘Voluntarily’ Steps Down as Tizeti CEO as Sexual Harassment Scandal Heats up the Tech Space appeared first on Technext.