Lightyears 101: Are We Watching the Stars In Real Time?

In our solar system, Saturn is the farthest planet from Earth that can be seen with the naked eye. And if it is destroyed by an asteroid while you are watching it (with or without a telescope), the ringed planet would still be visible to you for around 80 minutes, on average, even after it’s in bits and pieces. This happens because the average distance between Saturn and Earth is 0.00015 light-years, which means that the light from Saturn takes approximately 80 minutes to reach your eyes at Earth.

So if any star that you are observing from Earth is 100 light-years away then what you are watching from your telescope is not its current status but what the star was 100 years ago. This is also why sometimes telescope is called an astronomical time machine. Measuring astronomical distances in miles or kilometers is impractical because of the huge distances and the scale of figures being used. Measuring in light years also allows astronomers to look back in time. Because light takes a standard amount of time to travel to our eyes, everything we can view in space has already happened. So, when you observe something exactly two lightyears away, you see it as it appeared exactly two years ago.

What is a lightyear?

Since the distance between cosmic bodies mostly came out in the form of millions and billions of kilometers, a more convenient measuring unit was required to easily express such large distances and this led to the lightyear being used as a unit for measuring astronomical distances.

As the value suggests, light year (or lightyear/ly) is a unit of distance. One common misconception about lightyear is that it is a unit of time, which is wrong. Lightyear is generally used to express the distance between Earth and celestial bodies outside our solar system.

Speed of light and the discovery of lightyear

Distance of various nearby stars from Sun in lightyears. Source: atlasoftheuniverse.com/Wikimedia Commons

For scientists to correctly figure out light year, it was important that they have the value of the speed of light. The ancient Greek philosophers disagreed onthe nature of light speed. The philosopher Empedocles thought that light traveled and so must have a rate of travel. Aristotle, in contrast, argued that light was instantaneous.

In the mid-1600s, Galileo Galilei conducted experiments on the speed of light using people placed on hills around a mile apart, holding lanterns. But the distance wasn't far enough to record the speed of light, only to conclude that light traveled faster than sound.

In 1676, Danish astronomer Ole Rømer, accidentally came up with a new estimate for the speed of light, while trying to create a reliable astronomical clock for sailors at sea. He used observations of the eclipses of Jupiter's moon, Io, to estimate the speed of light at about 124,000 miles per second (200,000 km/s).

However, this is different from the speed of light that we know today (299,792 km/s), but this anomaly was not because Rømer’s method was flawed, but due to the fact that at that time the actual diameter of Earth (12,742 km) was not known. Later, Dutch mathematician Christiaan Huygens calculated the speed of light as 220 million miles per second (much closer to the actual) by applying the true value of Earth’s diameter in Rømer’s calculations.

In 1729, English astronomer James Bradley put forward his theory concerning aberration of light (apparent motion of stars relative to their velocity) before the Royal Society. In his study, he estimated the speed of light at 185,000 miles per second (301,000 km/s), which is within about 1% of the value that we know today.

Two separate attempts in the mid-1800s, by French physicists Hippolyte Fizeau and Leon Foucault, each came within about 1,000 miles per second (1,609 km/s) of the speed of light.

In 1879, physicist Albert A. Michelson used mirrors and lenses to measure the speed of light at 186,355 miles per second (299,910 km/s). Forty years later, he used a mile-long depressurized tube of corrugated steel pipe to simulate a near-vacuum and give a better measurement, which was only slightly lower than the accepted value of the speed of light today.

In 1838, German physicist Friedrich Wilhelm Bessel used the value of the speed of light to measure the distance between Earth and binary star system 61 Cygni. Though he didn’t explicitly mention the word ‘light year’, he explained that light would take 10.3 years to reach from 61 Cygni to Earth. This was the first time, a physicist used light year as the measure of distance, and therefore, Bessel is also credited as the person who discovered lightyear.

The term ‘lightyear’ was mentioned for the first time in a Germany-based publication called Lichtjare in the year 1851. By the time Einstein came up with his theory of Special Relativity (E=mc2) positing that light always travels with a finite speed, lightyear had already become a popular unit for measuring astronomical distances among scientists.

Light year vs astronomical unit vs lunar distance vs parsec

Apart from lightyear, there are other units as well such as astronomical unit (AU), lunar distance (LD), and parsec (pc) which are used to measure the distance between different objects in space. In astronomy, lunar distance, or Earth-moon characteristic distance, is the semi-major axis of the geocentric lunar orbit. It is approximately 400,000 km, which is a quarter of a million miles, or 1.28 light seconds. Lunar distance is commonly used to express the distance to near-Earth object encounters.

A Parsec is the distance at which the radius of Earth’s orbit subtends an angle of one second of arc (an angle is subtended by an arc when its two rays pass through the endpoints of that arc). Thus, a star at a distance of one parsec would have a parallax (the angular difference in direction of a celestial body as measured from two points on the Earth's orbit) of one second. One lightyear is equal to 63,241 AU but one parsec is equal to 3.26 ly or 206,265 AU.

Some interesting facts about light years 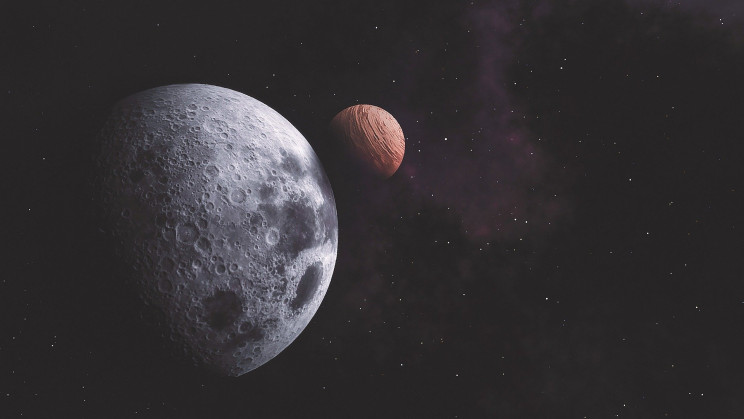 A lightyear can be further divided into light hours, light minutes, light seconds, and even light nanoseconds, for example, light from the Sun takes eight minutes to reach Earth, which also means that Sun is eight light minutes away from Earth. Here are some interesting facts related to lightyears:

Voyager 1, a space probe launched by NASA in 1977 transmitted a signal in November 2021 from a distance of 21.31 light hours (14.45 billion miles). This is the farthest distance any artificial object has traveled in space.
The nearestknown galaxy to the Milky Way (our galaxy) is the Canis Major Dwarf Galaxy, which is 25,000 light years from the Sun. The Sagittarius Dwarf Elliptical Galaxy is the next closest  at 70,000 light years from the Sun.  The most distantly located known-galaxy from Earth is called GN-z11, it was detected by the Hubble telescope in 2016 and at that time it was believed to be 13.4 billion light years away from Earth, or 134 nonillion kilometers (that's 134 followed by 30 zeros).
A radar system that uses radio waves to detect a flying aircraft measures time in nanoseconds to figure out how far a target is because radio waves travel at the speed of light. A nanosecond is equal to one billionth part of a second. Light travels at 1 foot (30cm) per nanosecond.
NASA recently claimed that its Parker Solar probe has “touched the Sun”. It is also believed to be the fastest human-made object in space and is expected to reach speeds of 430,000 mph (690,000 kph). That's fast enough to get from Philadelphia to Washington, D.C., in under a second.

Great American astronomer Edwin Hubble once said, "The search will continue, the urge is older than history, it is not satisfied and will not be suppressed". Space exploration can also be considered a search for what lies beyond Earth and stars. As a unit of distance, the lightyear is also a reminder to us of just how vast the universe is, and how much humanity and science still have to learn.