A cybersecurity firm, Kaspersky, has reported that Nigeria ranks among the top ten countries with the highest number of computer virus attacks in the world. Nigeria and Algeria are the only 2 African countries ranking in the top 10 for the mobile attacks.

The dominant malware attacks on the 2 countries were targeted at mobile devices. 15.58% of mobile users in Nigeria experienced a mobile malware attack within the first quarter of the year while Algeria had a higher percentage of 21.44, according to the report.

Globally, 49.9% of the mobile malware threats detected were adware apps, whose threats increased by 19% compared to Q1 2019. Other malware detected include HiddenAd and Ewind families which together form 40% of detected adware threats. There is also the FakeAdBlocker family which had a 12% occurrence rate.

Out of the installation packages that were available for use in the Q1, 1,152,662 were found to be malicious. 42,115 of the malicious packages were mobile banking trojans and 4,339 were mobile ransomware packages.

COVID-19 is a major marker of the Q1 incidents, and malware creators took advantage of the panic and fear associated with the pandemic to get access to people’s details. One of the popular malwares employed by hackers is the Coronavirus Finder.

The malware is a modified version of the Ginp banking trojan and claims to be able to detect nearby people who have been infected with the COVID-19. The malware is disguised as an app and sold for €0.75 (N358).

After it has been installed, the trojan tries to gain access to bank card details and remains on the mobile phone as a means for cybercriminals to intercept text messages such as two-factor authentification codes without the owner being aware. 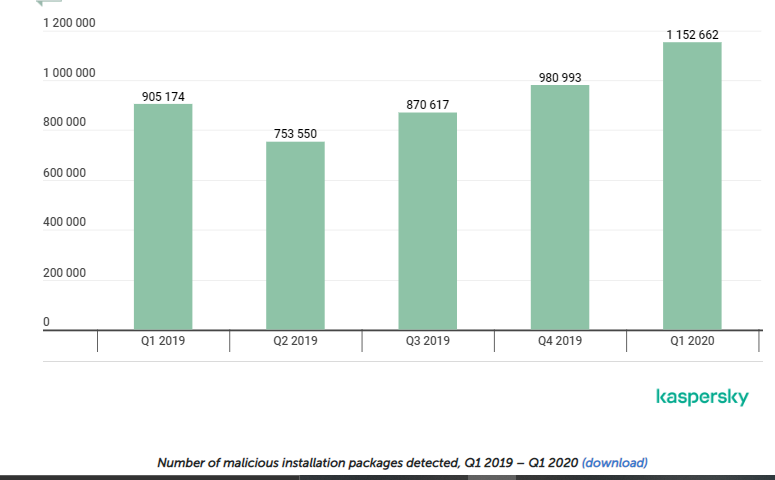 With digital banking being on the rise and more banking services being performed on mobile apps, the increase in the presence and activity of mobile banking trojans will likely continue to rise. This will be in an attempt to gain access to bank card details and siphon funds or divert it for other purposes.

Obtaining apps from registered stores like the Playstore and Appstore can help reduce the installation of harmful softwares on mobile devices and protect sensitive information from being hijacked.

The post Nigeria Has The 4th Highest Computer Virus Attack in the World For Q1 2020 appeared first on Technext.