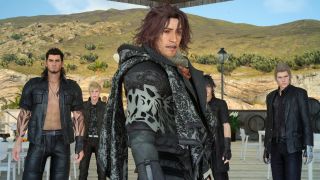 Fans are eager to move on from the FF13 trilogy, FF14 is a failed MMO that hasn't been reborn yet, and Final Fantasy 15 is in limbo. At a time when the FF15 that we eventually got was nothing more than a spin-off of FF13, Square Enix was prepared to give its most successful western studio, Eidos Montreal, a shot at making the next great Final Fantasy.

As told by YouTuber Super Bunnyhop back in 2018, the game was codenamed Project W, and it sounded ambitious—a "space opera" with airships and floating castles that'd let players fly seamlessly from planet to planet long before No Man's Sky impressed us with the same trick. For years, Project W has largely existed behind the words of anonymous sources, but former Eidos Montreal art director Jonathan Jacques-Belletête recently opened up about the studio's cancelled version of FF15 in an interview with TrueAchievements.

"[Eidos-Montréal] brought back Deus Ex. I was the art director on that—Deus Ex: Human Revolution. Then [I was] the executive art director on Mankind Divided," Jacques-Belletête said. "Then we tried to do Final Fantasy XV. Then they decided to bring it back to Japan—which I think was a big mistake, but it's still the truth. Ours was really, really cool.”

Jacques-Belletête apparently didn't go into any more detail, but his comment roughly supports the Project W leaks from Super Bunnyhop's video. It is notable that Jacques-Belletête mentions working on the scrapped FF15 after Mankind Divided, a game that came out the same year as the real FF15, but this could be a misunderstanding.

Super Bunnyhop's report claims the failed pitch for Eidos' space-faring RPG was shot down by Square Enix leadership sometime in late 2011 or 2012 as Eidos was still riding the high of Deus Ex: Human Revolution's success.

There's even some (unconfirmed) concept art for the Eidos Final Fantasy project floating around (as shared by Super Bunnyhop in a follow-up video in 2018), and what they had sure looked pretty.

But alas, for what was likely a bucketful of reasons, we now know Square Enix dropped the idea and gave the project back to its internal studios in Japan (a decision that Jacques-Belletête called a "big mistake").

Fast forward to 2022, and Square Enix has closed the loop on its tumultuous relationship with western studios by selling off Eidos Montreal and Crystal Dynamics to Embracer Group for $300 million.