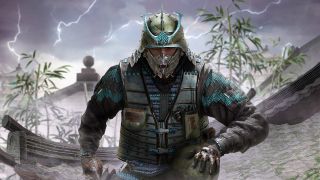 Friendly fire enthusiasts be warned: Rainbow Six Siege's next update, Operation Vector Glare, will bring new sanctions against serial griefers. Players who repeatedly injure teammates enough to activate reverse friendly fire (a state in which damage to teammates is reflected back at you) will soon see the effect carry into their next matches automatically. In a presentation to press, Siege game director Alex Karpazis called this new rule "preemptive reverse friendly fire."

Essentially, this means Siege will now remember when you've been a crappy teammate, at least as it concerns friendly fire, which is one of the most common forms of grief in Siege. In the example shown to press, a notification on an offender's main menu showed that RFF would be active for the next 20 matches and would expire after "multiple matches without injuring teammates." That's a lot of matches to finish with a clean record, but Karpazis told me he wasn't certain if the 20-match figure will reflect a real sanction once it's live.

Players weaponizing friendly fire has been a problem in Siege for its entire existence. Siege is one of just a few shooters out there with friendly fire turned on, and it is by far the least forgiving—a single shot to the head with any gun is an instant kill for enemies and allies alike.

Over the years, some players have called on Ubi to decrease team damage or turn it off altogether, but the studio has taken a hardline stance that learning how to shoot at enemies while not shooting at your friends is a foundational skill of Siege that's not going anywhere. Instead, Ubi enacted reverse friendly fire in 2019.

Up until now, RFF has been successful at mitigating griefing after it's turned on, but because players start each match with a clean slate, those looking for a friendly fire fix can comfortably kill at least one teammate every match before RFF flips on. That's where this new "preemptive" step comes in, identifying those trying to work around the system and inflicting always-on sanctions until they straighten out.

I can't detect any holes in Ubi's logic here, but I do worry about stricter punishments for false positives. Sometimes a teamkill really is an accident. When it is, the teammate killed decides the offender's fate: declare it was unintentional and move on, or decide it was malicious and activate RFF.

While some players have forgiven me in the past for a genuinely accidental kill, many instantly press the "on purpose" button out of frustration before reviewing the replay. Hopefully, Ubi's judgemental gears are tuned correctly and won't needlessly hand down 20-match sanctions on a new player who's trying to learn the game.