The recently launched #EndSARS protester’s online radio “Soro some has been put to a halt in it’s activities as Twitter suspends the official handle on the grounds of alleged violation of Twitter rules.

The online radio had been launched to share legit updates on the #EndSARS protests via its podcast to people who may be unable to obtain such information across social media.

The phrase “Soro Soke”, after which the online radio is named, has been largely used in the course of the #EndSARS protests both on the net and out on the streets. 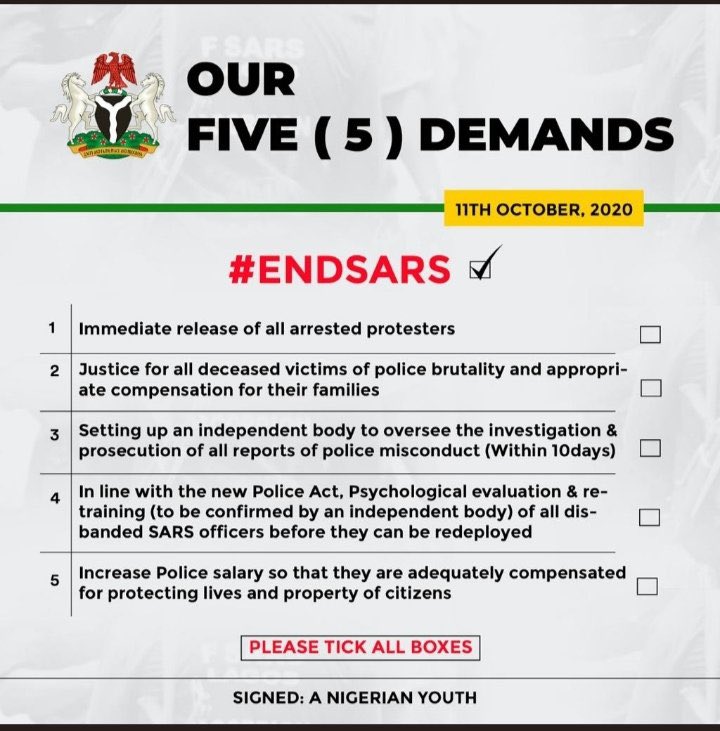 Soro Soke happens to be a phrase in Yoruba language which can be translated in English language to mean “Speak Up”. It denotes the current action of young Nigerians who are speaking up and putting out their voices against the cruelty and corrupt practices of the Nigerian Police, as well as the oppression, intimidation, extortion and gross corruption fraught in the country.

The online #EndSARS radio is concurrently campaigning for the five demands Nigerian youths have asked that the government acknowledge and executive before they will bring an end to the #EndSARS protests.

1. Immediate release of all arrested protesters.

2. Justice for all deceased victims of police brutality and appropriate compensation for the families.

3. Setting up an independent body to oversee the investigation and prosecution of all reports of police misconducts (within 10days).

4. In line with the new Police Act, psychological evaluation and retraining (to be confirmed by an independent body) of all disbanded SARS officers before they can be redeployed.

5. Increase Police salary so that they are adequately compensated for protecting lives and property of citizens.

The live podcast which is available on Mixlr, majorly informs listeners of new updates and development with respect to the #EndSARS protests currently ongoing across Nigeria. It also takes breaks for music before progressing with the updates.

The songs played during the music breaks are termed “revolutionary” as they feature lyrics that calls for good governance, accountability, peaceful living, etc. Some of the songs played are Michael Jackson’s Heal the World, Falz’s Talk and Jonny, and also, Timi Dakolo’s Great Nation.

Also, tributes have been paid to some of those persons who had lost their lives to brutal treatment of SARS. The radio has also given salutation of honor to late Anthony Onome, who lost his life recently, after being inflicted with stab wounds by thugs at the #EndSARS protest in Abuja, the Federal Capital Territory.

Expectedly, Nigerians did not welcome the news of the ban by Twitter, and has expressed disappointment, Calling out to Twitter and CEO Jack Dorsey, who had supported the #EndSARS protests few days back, to restore the Soro Soke radio account, with claims that the online radio represents the voice of alot of Nigerians in their stand against the brutality and impunity of the Police in the country.

Several Nigerians had earlier lauded the initiative in the launch of the Soro Soke online radio.

Chidi, a twitter user, noted that it offered people the platform to get up-to-date information about the #EndSARS protests.

Preye, another user, was particularly concerned and soberly pleased with the tributes paid by “Soro soke” radio to victims of police brutality.

Reacting to the ban, a twitter user, Olugbemiga, shared his view and stated that the #EndSARS Soro some radio is acting independently and is unaffiliated to any political party which could have led to its ban, as there were claims from some quarters that the radio was politically sponsored. “@jack, please note that @Sorosoke247 is the voice of all Nigerians at this trying time of #BadgovernmentinNigeria and struggle for #PoliceBrutalityMustEnd. Suspending the account is ‘shutting Nigerians up’. This is an NGO and no political affiliation. @Falzthebadguy @Phynofino”.

Not everyone however, was pleased with the choice of name for the online radio. Some claimed it projects the #EndSARS protests as a Yoruba movement instead of a national one and asked that it is renamed #EndSARS radio instead.

Nigerians are still calling out to Twitter over the ban and expecting an overturn in the suspension of the online radio.