The Tecno Camon 12 Pro is undoubtedly Tecno’s 2019 best product. The introduction of Camon 12 Pro signifies the beginning of a new era in the Tecno Camon Series. There are lots of amazing features we haven’t seen on Tecno Camon devices before. The new in-display fingerprint scanner gave the smartphone a rich-style look.

Apart from the impressive in-display fingerprint scanner, the Camon 12 Pro sports more awesome features that can be compared to the flagship Phantom 9 while offering at a cheaper price. Overall, this device makes a difference in the smartphone market with its amazing features. There are lots of interesting features Tecno offers its fans in this Camon 12 Pro. Do you want to know more about the specs, features, and price of Camon 12 Pro in Nigeria? Stick around as we bring to you the full review of the Tecno Camon 12 Pro device. 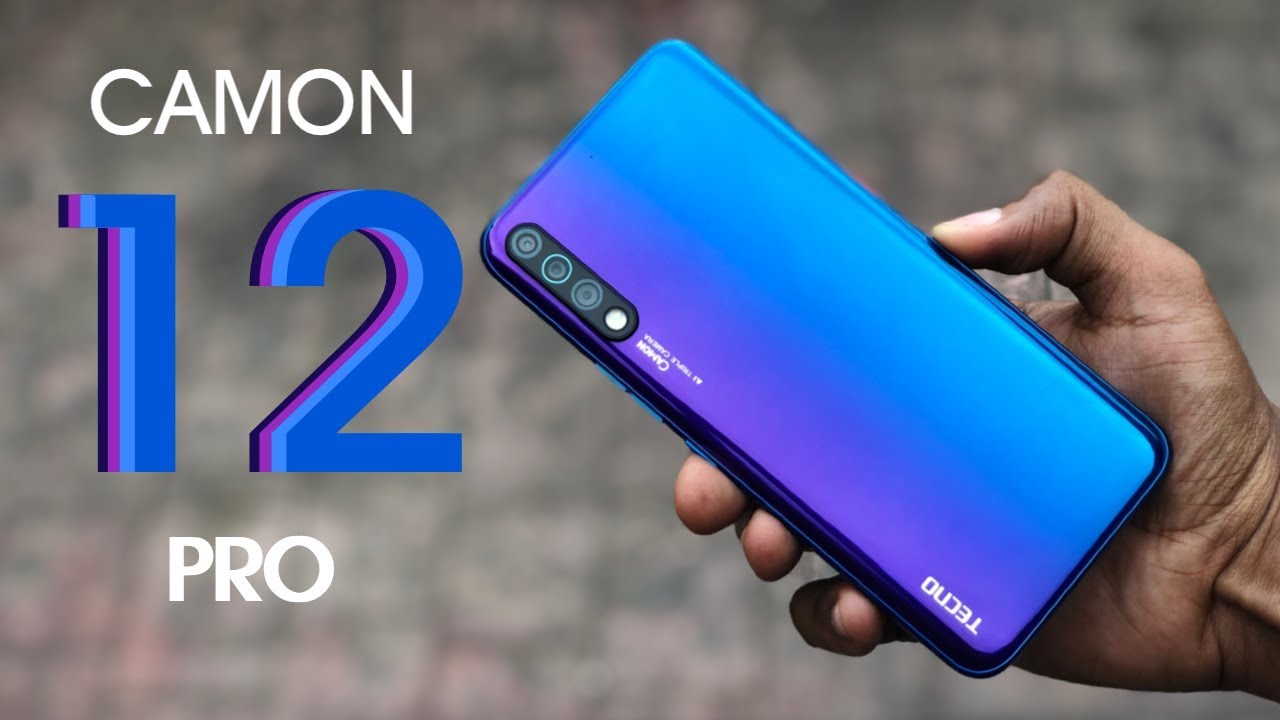 In normal classic design patterns, the Camon 12 Pro is a rectangular shaped shape with a 6.4-inches display. It has circular corners that makes it comfortable for one-hand operation. The body is made mostly of plastic with the screen covered with glass. Unfortunately, there’s no aluminum considering most smartphones from this price segment offers superior build up quality. However, the plastic panel is good sometimes as it makes the phone to be lightweight, while metal can only make it more substantial.

The Camon 12 Pro is narrow too, with an 18:9 aspect ratio which is norm on modern smartphones. The screen fills the phone’s entire front panel, although there are little bezels at the edges especially on the bottom area . On the front, there’s a teardrop notch which houses the selfie camera. Unfortunately, the Tecno Camon 12 Pro comes in only Dawn Blue color option.

The rear panel is very glossy and stylish. There’s a vertical triple rear camera that is accompanied by a LED flash. Amazingly, there’s no fingerprint scanner on the rear as usual with normal mid-range smartphones, instead, Tecno optioned for an in-display fingerprint scanner which is the latest and only found in Tecno Phantom 9, and other flagship devices.

As usual, there’s a micro-USB port, headphone jack, and speaker grills on the bottom edge of the phone. The left side is occupied by dual SIM cards and an SDcard tray. The introduction of dual-SIM into modern smartphones is a smart approach as it eliminates the problem of carrying two phones around.

On the display side, the Tecno Camon 12 Pro packs a 6.4-inches AMOLED display with a waterdrop notch which hosts the selfie camera. The screen display is perfect for watching movies and playing games as the AMOLED display which more colorful and brighter. There’s an eye care protection technology that protects the eyes from screen irritation and made reading more comfortable and enjoyable.

On the camera side, the triple rear camera does an impressive job, especially in good lighting environments. You can effectively capture wide-angle and portrait shots, although the latter is not very good when compared to other mid-range devices. However, they perform perfectly more than we expected while offering at this cheap price tag.

The vertical rear AI Max camera set-up on the rear compromises of 16-MP main shooter, 8-MP depth sensor, and 2-MP ultra-wide lens with a quad flashlight for lowlight photos. This triple-camera can deliver up to 120° super wide-angle photos and 2cm macro photo shots.

Latest Tecno Smartphones 2020: Their Specs and Prices in Nigeria

However, we aren’t surprised at Camon 12 Pro’s camera quality as Tecno Camon Series is known to be camera-centric, and this Camon 12 delivers perfectly at that. This phone’s camera can take more stunning natural photos than you can ever imagine. The bokeh photo effect is what marvels us as the camera identifies the main subject, and blurs the image’s background.

The Tecno Camon 12 Pro runs on a MediaTek Helio P22 processor that performs perfectly on basic duties, though you’ll find it lagging while performing a high task or playing high-end games. The Tecno Camon 12 Pro comes with 6GB RAM and 64GB inbuilt storage which you can choose to expand through SDcard if you aren’t satisfied with the available option.

On the battery side, the Tecno Camon 12 comes with a non-removable 3500mAh battery that can last up to 24 hours depending on how you use your device. There’s also a fast-charging capability that allows you to fully power your phone within 2 hours.

Oppo A92 Review: Full Specifications, Features, and Price in Nigeria