Sequel to quite a series of talks on plans to privatize the telecom industry in Ethiopia, it has been disclosed by the Ethiopia Communications Authority (ECA) that operations by two new International telecom operators would commence in the market of Ethiopia by April, 2021.

Recall that in August, telecom privatization plans were resumed after previously putting the process to a halt. The privatization of the state's monopoly is a part of the extensive economic reform programme by the Prime Minister, Abiy Ahmed. In effect, the privatization deals attracted bids from a number of telecom companies to compete for the operating licenses of the two-mobile network. Some of the bidders were, MTN Group, Etisalat, Safaricom and Orange, among others. 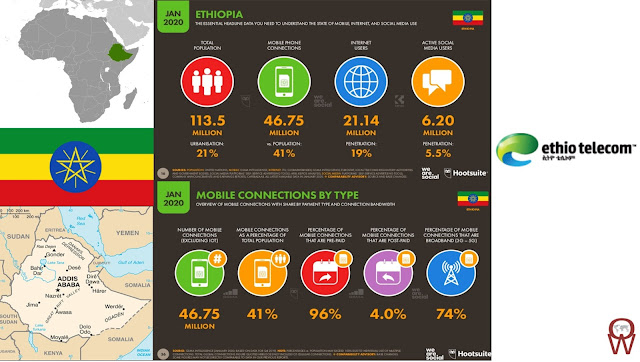 Balcha Reba, ECA Director General noted that technical and financial capacities and also, network security in operating were part of the key prerequisites to be assessed by the authority in the process of selecting the operators best qualified to be handed the deal.

Merits or Advantages of the privatization.

The ECA Director General also stated that telecom network coverage will be consequently increased with the progressing privatization of Ethiopia's telecom sector. It will also raise the financial strength of the telecom sector and promote digital development in the country.

The telecom reform is also crucial with the increase in network access which it will cause across the country, particularly in rural communities, as over 70 million Ethiopians are not subscribed to any mobile network.

The ECA is yet to reveal the complete details of the deals on privatization, but it has however disclosed that a 20% stake will be acquired by each of the two mobile operators in the Ethio Telecom owned by the Ethiopian government.

At present, Ethio telecom provide services to about 46 million subscribers across the country. Although data is not available on the company's market value, a total revenue of 47.7 billion ETB (US$1.35 billion) was reported for its financial year ending, 30 June, 2020. This thus implies that the company is a multi- billion dollar one, and a 20% stake by the other mobile operators will be worth hundreds of millions of dollars.

The subsequent entry into the Ethiopian telecom industry by the two International mobile operators will cause an increase in both internet access and usage among the Ethiopian people. The current internet population of Ethiopia is 24 million which represents only 20% of the people in the country who are over 115 million.

Ethio telecom, being the sole telecom operator in the country, offers voice, data and SMS services to 40% (46 million) of the population of the country. Yet only 24 million of the 46 million subscribers actually use internet and data. Some of the reasons for this are the slow and unstable internet connection of the telecom company, and expensive data tariffs. This likely led to the loss of 20 million subscribers between 2018 and 2020, which gave up the network.

According to a research in 2019, the cost of living in Ethiopia is estimated at 4,200 ETB (US$110) per month. And according to Salaryexplorer, the average minimum wage is about 2,250 ETB, although a minimum wage is yet to be agreed on by the government.

On the basis of these figures, the average Ethiopian earns 1,950 ETB (US$51), which is less than the cost of living per month. Thus, there is not enough earned to offset living expenses for a large proportion of people, let alone purchase data plans.

Spending on voice and SMS is mostly preferred by many Ethiopians, as Ethio's 1gb monthly data is priced at 100 ETB which is about 4% of the average minimum wage.

In effect, the competition to be provided by the incoming mobile networks will significantly increase the patronage of internet data plans in the country, as competition influences operators to review pricing and introduce tariff models in the bid to sustain their market presence and preference among competitors.

Ethio telecom had failed so far to address criticisms over its poor internet service and high tariffs in recent years from a number of subscribers. The mobile network operators coming, will therefore, likely offer much more affordable data plans and faster internet speeds which could stir up Ethio to address these issues and resolve them.

Whatever be the case, the telecom sector of Ethiopia is certain to witness a major increase in its services with the privatization deal on board.