For people in the 19th century, Thomas Alva Edison was a wizard. His "inventiveness" was an embodiment of Arthur C. Clarke's famous and often overused quote, "Any sufficiently advanced technology is indistinguishable from magic." In fact, after his invention of the phonograph in 1877, he became known as the “Wizard of Menlo Park”.

As for his detractors, they believed Edison's greatest and only true invention was his perfectly crafted image. What is history's verdict? Neither is necessarily true. Edison's contributions to society are equally great and controversial. Some of his 1000+ inventions have gone on to shape our lives. However, he is also not the saint of science that some of our school teachers taught in grade school.

The American inventor was a ruthless businessman, opportunist, and had an impressive streak of "modifying" original, inventive ideas. The latter habit was not necessarily always a bad thing. Edison had the impressive ability to take an idea and bring the absolute technological best out of it, making it practical, and in a lot of cases, create something almost magical. We are not here to crucify Edison. Rather, we will present the facts behind some of Edison's most essential inventions. America's greatest inventor or thief? We will let you decide.

Thomas Edison's inventive mind can be traced all the way back to his childhood.

If you want to gain further insight into Edison's later career, you should know about his early days. The youngest of seven children, Thomas Alva Edison, was born February 11, 1847, in Milan, Ohio to Samuel and Nancy Edison. Edison was a poor student but his mother blamed the school rather than Edison and took him out of school. Edison was a voracious self-learner, reading everything that he could get his hands on. This infinite curiosity is would go on to fuel his passion for creating and inventing as well as his business acumen. 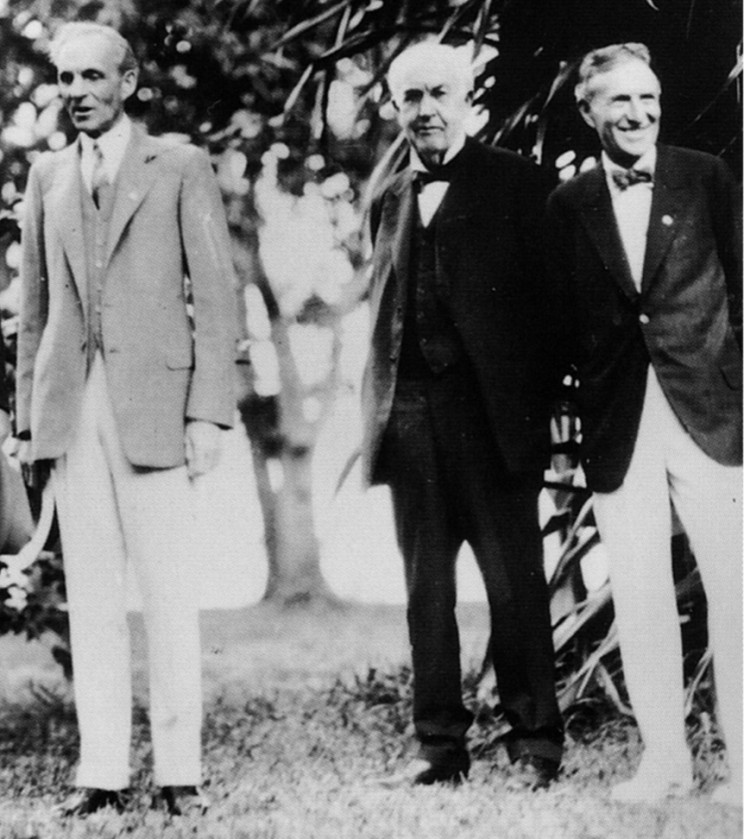 By his teenage years, the young inventor had built a chemistry lab in his mother's basement, an endeavor that ended explosively. After starting a potentially destructive fire in one of his experiments, Edison turned away from inventing for the sake of invention. Edison made it his mission instead to pursue ideas that were both practical and profitable. It turns out, Edison was very good at this.

This "invention," along with others on this list, demonstrates Edison's genius. However, it was not necessarily an inventive genius in a traditional sense. In regards to the light bulb, the businessman did not actually create the concept. From all the way back in 1761, people were making wires incandescent, with a handful of inventors not only demonstrating the concept, but patenting various versions of incandescent lights. However, these lightbulb precursors lacked two essential Edison ingredients, profitably and practicality. Throw marketability in there too, if you'd like. 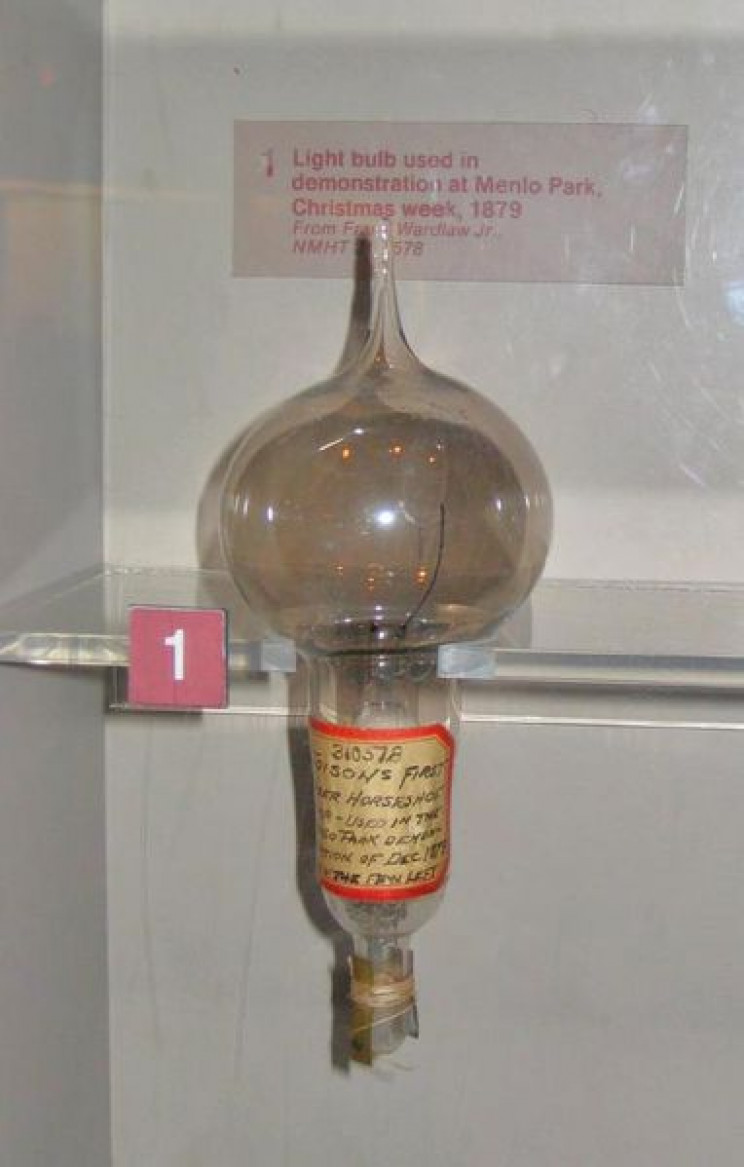 Long before Edison patented the first light bulb and started commercializing the product in 1880, British inventors were demonstrating that electric light was possible with the arc lamp. In 1835, the first constant electric light was demonstrated, with researchers across the world working hard to create the right filament to create a sustained lightbulb. The issue was that the lights that were being created had extremely short lifespans and were expensive to produce. Edison and his team of researchers added new life to the lightbulb.

Edison set teams of experimenters to work, rigorously testing sample after sample to figure out what material worked best for the filament. Taking years of experimentation, in 1879 Edison's team eventually produced a light bulb with a carbonized filament of uncoated cotton thread that could last for 14.5 hours. Continued experimentation with lightbulb designs and materials over the years would eventually lead to a bulb that could last more than 1,200 hours. Thomas Edison (and his team) did not invent the incandescent light bulb. However, he did invent and market the first design that was long-lasting and practical for commercial uses.

Edison also knew that inventions like the lightbulb were of little use in isolation, they had to be sold as elements in a practical system. Inventing the light bulb and coming up with systems for electric power generation and transmission had to go together, which is why he also invested a huge amount of time and energy in creating systems for power generation and transmission — he knew that he could not sell light bulbs unless people also had electricity in their homes and offices.

But, he did invent it. While working on two other inventions, the telegraph and the telephone, Edison came up with the idea for the phonograph. The businessman worked on a machine that would allow people to transcribe telegraphic messages through indentations on paper tape, which could later be sent over the telegraph. In his work, he hypothesized that messages could be similarly recorded. However, he wanted to take the idea further, recording not just voices but also musical sounds using a diaphragm that would then push a stylus, creating indentations on a cylinder covered with wax which was being turned by a crank. Edison set out the idea on paper, and then employed machinist John Kruesi to build the machine. 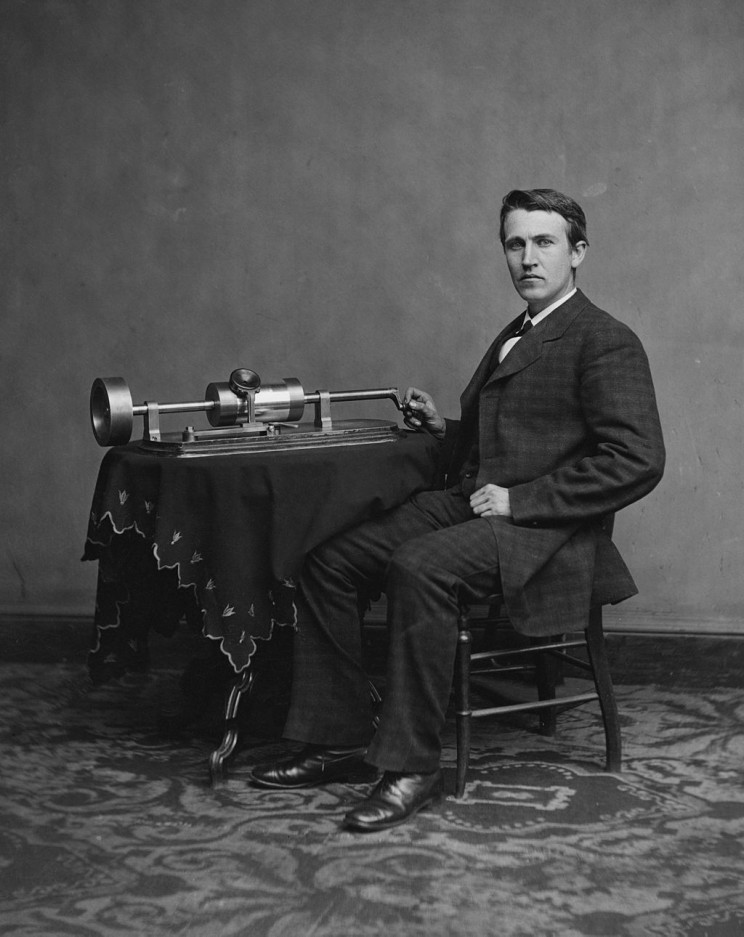 The phonograph was born in 1877, completed in just 30 hours. The phonograph was significant not just because of the technological feat but also because it helped enhance Edison's reputation as an inventor. The businessman marketed and sold the machine, promising eager buyers that his phonograph could help individuals with letter writing, reproducing music, playing music, preserving languages, and "reading" to the visually impaired.

If you got this one right, you are catching on. On March 7, 1876, 29-year-old Alexander Graham Bell officially received his patent for the revolutionary new invention, the telephone. From a young age, Bell was interested in the possibility of transmitting speech over wires. By 1875, Bell, with the help of his partner Thomas Watson, had come up with a simple receiver that could turn electricity into sound.

Thomas Edison built upon this idea, expanding the distance at which people could hold a conversation over a telephone. He did this by improving on Bell's original transmitter, using a battery to create a stronger electrical current, and controlling its strength by using carbon to vary the resistance. He later designed a transmitter in which a small piece of lampblack (a black carbon made from soot) was placed behind the diaphragm. Eventually, Edison improved on his own design, opting for granules made from coal. This basic design was used until the 1980s.

Telsa and Edison had a fierce rivalry that lasted until the very end of their lives. One claim that has followed Edison is that he thwarted Tesla's idea for radar during World War I. As the story goes, Nikola Tesla pitched using radio waves to track targets to the Edison-owned Naval Consulting Board. According to the story, Edison was able to prevent Tesla's idea from coming to fruition. However, this story is wrong on multiple levels.

Tesla did, in fact, present this idea for radio waves, and it was rejected. However, it was rejected because Tesla pitched the idea for the tracking of submarines. Radar is useless for tracking submarines underwater because water attenuates radio waves. That is why sonar eventually came to be. Secondly, although radar is often attributed to Nikola Tesla, that is sort of a myth. In and of itself, radar would not exist without the groundbreaking work of German physicist Heinrich Hertz.

Furthermore, the work of other pioneers like Lee De Forest, Edwin Armstrong, Ernst Alexanderson, Marconi, Albert Hull, Edward Victor Appleton, and several Russian developers is attributed to making the first Radar system possible in 1934. Edison might have had his occasional beef with Tesla, but he is not the type of man to pass over an idea that could make money. The idea has to be good first.

True or false, Thomas Edison contributed to the "stealing" of the Tesla radio idea

It depends on who you ask. Some people will tell you that Nikola Tesla invented the radio. Others will tell you that it is a myth. According to Tesla, he had the idea for the radio in 1895, with a prototype ready to go. However, a devastating fire destroyed his laboratory and much of his work. Nonetheless, Tesla managed to file patents for his wireless communication design in 1897, and they were granted in 1900. Independently, Guglielmo Marconi was also working on his own version of the radio and had taken out the first wireless telegraphy patent in England in 1896, and filed a patent application in the US in 1900.

Originally, Marconi was denied patent approval because of similarities between his design and Tesla's. However, things quickly changed in 1901, when Marconi was able to send the first transatlantic message, using what Tesla claimed were 17 of Tesla's own patents. Edison then threw his vast financial support behind Marconi and in 1904, the U.S. Patent Office suddenly and surprisingly reversed its previous decisions and gave Marconi a patent for the invention of the radio. There has never been a proper explanation for this sudden change; however, some have speculated that Edison's financially backing and influence in the U.S. patent could be the reason.

In 1943, six months after Tesla's death, the U.S. Supreme Court ruled that Marconi's patents were invalid and awarded the patents for radio back to Tesla. At the time, the Marconi Company was suing the US government for use of its patents in World War I, and by invalidating Marconi's patents, the court also nullified the lawsuit.

From the start of his career to the end of his career, Edison would obtain 1,093 US patents and another 500 to 600 applications that he either didn't finish or were rejected. Notable inventions include the alkaline storage battery, the movie camera and viewer, wax paper, the electrographic vote recorder, a talking doll, and a way to preserve fruits. Even more so, he helped create industrial research laboratories that breed innovation.

Edison did not create everything on his own. He built off previous existing ideas and used an extensive team of experts to bring his ideas to life. His genius was his ability to pick and create the right ideas that could have the most impact. He was not a villain or thief. If anything, Edison was a businessman.