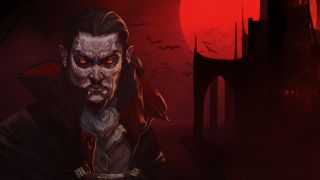 Hit roguelite bullet hell extravaganza Vampire Survivors got a new update today, and while its 0.6.0 iteration will feature "less content than usual," there's still plenty of new material and adjustments to sink your pointy teeth into:

Halved base duration of Shadow Pinion and Valkyrie TurnerShadow Pinion and Valkyrie Turner striking attack has a damage bonus depending on how long it has been "charged"Arcana XIX - Heart of Fire also affects Valkyrie Turner's striking attack and Phiera Der TuphelloEvery bonus point in Armor now also increases retaliatory damage by 10%. Retaliatory damage is currently inflicted by NO FUTURE and Arcana XIXMusic and music mods can now be previewed in stage selection screenRerolls can now be used to draft Arcanas

Unfortunately, due to one of the new game mechanics, the time has come to fix the Bone-stuck-in-the-boss glitchTentative fix to items sometimes not levelling up near the end of a run

If this represents developer Poncle's slower pace of content updates, it's still very impressive for a solo developer, and especially for a game that costs just three bucks.

PC Gamer's Rich Stanton caught up with Poncle back in March, discussing the origins of the "accidental" indie hit, its unbeatable price, and Poncle's philosophy for balancing such a strange game. I certainly wish more developers behind singleplayer games would take his lead and not worry too much about balancing—I've had too many beloved OP strats in RPGs snatched away by cruel, cruel devs.