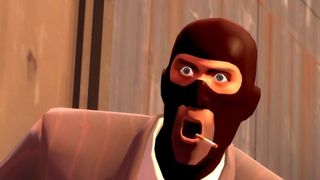 Way back in the day, Valve had a wonderful idea for marketing Team Fortress 2—it made a bunch of high-quality shorts that were both funny and encapsulated something about the team member they focused on. Everyone has their favourite (Pyro is best, as always) but they're all pretty great, and one of the best was Meet the Spy.

It's a great couple of minutes, with an expertly delivered 'your mother' joke, and manages to pack a huge amount of TF2 personality in there while also underlining just how dangerous a spy can be. Now, thirteen years after the short's release, creator Pinewabble has released a map for TF2 that recreates the full short in 2Fort: to the extent that you can run the original short in-tandem as the map plays out.

You can see it in action, along with some picture-in-picture, in the below video. I always loved this short and it's hilarious to see the Heavy waddling down the corridor just like in the movie, and the player's various little interventions.

The map also edits 2Fort itself to make it look more like the version in the short, and lets you add or remove certain elements of what it does: such as recreating the groupshot at the end of the video. Let's face it, you probably won't be playing this for hours, but the idea of playing through something that was once an aspirational CG short... we've come a long way baby.

If your nostalgia glands are a-tingling, here's the original short:

Valve continues to low-key maintain Team Fortress 2, but the chances of it ever receiving another big content update feel slim—these days it mostly seems to be battling an endless army of bots. It's long-term future being community-driven always seemed like the studio's goal, with the maps workshop used for this being launched back in 2015.

The game remains incredibly popular and the subject of modding projects large and small: one group is aiming to somehow recreate the entire thing in Source 2, while others make ridiculously good Mega Man maps. It's funny to look back on this shooter now, and see how many of its embryonic ideas have become almost industry standards—you can make a good argument this is the single most influential shooter of the 21st century so far.